On April 8, 2000, Mark Hogancamp was attacked outside of a bar in Kingston, NY, by five men who beat him literally to death. Revived by paramedics, Mark had suffered brain damage and physical injuries so severe even his own mother didn’t recognize him.  When he emerged from his coma nine days after the attack he could barely walk, speak or remember anything from his previous life.  Less than a year later, Mark’s state-supported physical, cognitive and occupational therapies ran out. He 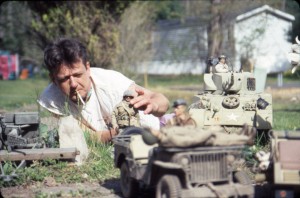 was 38, broke, living in a trailer and unable to work. And he was angry.  He realized he had two choices: he could give up and “let those five guys win,” or he could take control of his own recovery.

Mark started to look through his old journals to piece together his life.  Some of what he found was upsetting – he’d been a mean alcoholic who drove away his first wife, Anastasia. But he also discovered a talent for art and an old love of models and toy soldiers.  And that is where Marwencol was born.

Marwencol is a fictional World War II-era town somewhere in Belgium (but actually located in Mark’s backyard). It’s a sort of 1/6th scale demilitarized zone, populated with both Nazi and Allied forces, all of whom must abide by the town’s one rule: inside the walls of Marwencol, they must all get along.

“At first glance, Mark could be easily judged as hermetic and creepy”, says Malmberg. “He’s a 46-year-old man who spends his days playing with dolls and not speaking to anyone. My goal is to turn this snap judgment on its ear.  I want to blur that clear line of rational thought by making the audience an active participant in Mark’s recovery and artistic journey. Who’s to say that Mark’s constructed reality is any less valid than most people’s “real world”?  Immersed in Marwencol, an audience may find more love, pain, and feeling than in their actual lives.”
As Mark developed stories in the fictional town of Marwencol, he started documenting them through photography. What could have been flat tableaus were transformed through Mark’s artistic eye into rich, cinematic scenes that deftly hid the imperfections of the dolls and brought the plastic figures to life. In the process, Mark has had to face many of his demons.

Produced by Malmberg, along with Tom Putnam, Chris Shellen, Matt Radecki and Kevin Walsh, this unique documentary focuses on the subjective nature of reality.

“Mark would happily spend the rest of his life in Marwencol if he could.  To us as the audience, that feels like a tragedy. We want him to become a successful artist and to live in the real world” says Malmberg.  “But the real world rejected him, so he decided to create a world of his own. It’s this question – “what is reality?” – that will define whether a viewer sees the film as the tragic tale of an obsessed man or the uplifting resurrection of a gifted artist.”

Watch for this documentary coming to a theater near you soon. To view some of Mark’s artwork, visit http://www.marwencol.com