On Veteran’s Day, the American Legion Hollywood Post 43, Liberty Theater presented the world premiere of Everything In Between, in their Historic Cultural Monument Building at 2035 N. Highland Avenue.

The story deals with four generations of vets, brought together by chance, collaborate 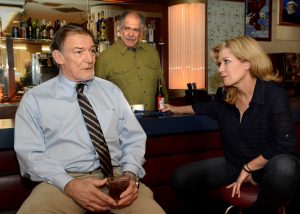 to help a young man returning home from Afghanistan. “Lance Porter” is haunted by the experiences that followed him back, and changed life as knew it. When his search for solace leads him to another bar, the cynical patrons threaten to lead him further down the rabbit hole.

“I have always had a story in my head about different generations of Veterans, from all branches of the military, coming together to help one another heal. It’s about the human condition that we all share and the specific condition that veterans share, along with the hope that things are somehow going to get better,” explains REBECCA STAHL; Playwright/MD

The play’s director, JOHN DiFUSCO is the recipient of a New York Drama Desk Award as well as a Los Angeles Drama Critics Circle, LA Weekly, NAACP Theatre, Drama-Logue, Robby, and Valley Theatre League Award. He began his professional career at the Odyssey Theatre with credits such as Peer Gynt, The Kid, The Caucasion Chalk Circle, The Balcony, and Mother Courage.

John created and directed the landmark Vietnam play Tracers, which premiered at OTE. He directed the 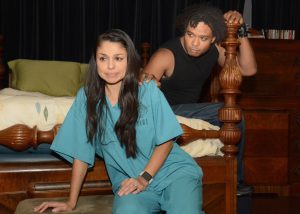 New York Premiere at The Public Theater, where it was published as one of “The Ten Best of 85/86.” He has toured extensively and internationally with Tracers, which continues to be produced around the world. Locally, he has directed numerous plays including Hair, White People, Avenue X, Joan and the Zulus, Just A Song at Twilight, Will Strip for Food, Ali, and Rounds. John received the USAF Commendation Medal for Meritorious Service in Vietnam.

The American Legion was formed in 1919 to give all veterans a place to congregate together in fellowship as well as memorial. The Hollywood post raised funds with the help of Charlie Chaplin, Douglas Fairbanks, Ida Lupino Clark Gable, Rudolph Valentino, Clara Bow, Mary Pickford, and the Marx Brothers who attended their boxing matches along side blue-collar patrons. The building described as “military in character and a dignified solution to the problem of combining a memorial and a clubhouse,” by the Los Angeles Times was opened on July 4, 1929.

“We came back from Vietnam alone. The term PTSD was developed from our experience and this often created barriers between us and our fathers and uncles who had served in WWII. We were labeled drug addicts, losers, and crybabies. Rebecca Stahl captures today’s Vet World where these gaps are non-existent. This is what attracted me to the play. In spite of any personal 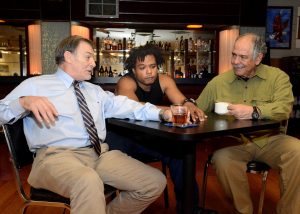 Everything In Between runs 8pm Fridays and Saturdays, and 3pm on Sundays through December 4, 2016 (no performance on November 25th).