Based on the 1891 Frank Wedekind play, 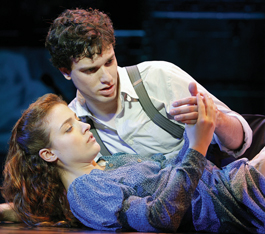 the landmark production is a stirring combination of sexuality, morality and rock &roll that has captivated audiences across the nation like no other musical in years.

Spring Awakening is set against the backdrop of a repressive and provincial late 19th-century Germany. The story follows a group of young students as they navigate through teenage self-discovery and coming-of-age anxiety. At the Pantages February 8 – 13.

Set against the backdrop of a repressive and provincial late 19th century Germany, the story follows a group of young students as they navigate through teenage self-discovery and coming-of-age anxiety. A powerful celebration of youth and rebellion, Spring Awakening exploded on Broadway on December 10, 2006. The New York Times proclaimed “Broadway may never be the same.” Originally produced by Ira Pittelman, Tom Hulce, Jeffrey Richards, Jerry Frankel and the Atlantic Theatre Co., the 2010/2011 National Tour of Spring Awakening is produced by NETworks Presentations, LLC.

Spring Awakening will feature a day-of-performance lottery to be held daily for a limited number of $25 on-stage seats, cash only. Two-and-a-half hours prior to show time, people who present themselves at the Pantages box office have their names placed in a lottery drum. Thirty minutes later, names are drawn for the on-stage seats. This lottery is available only in-person at the box office, with a limit of two tickets per person. ID is required to purchase lottery tickets.