Bob Hiltermann grew up in Germany, where he was the tenth of eleven children. Spinal meningitis left him deaf at the age of four, but it was not discovered until he was 10 years old. When he was six, his family relocated across the Atlantic to Canada. Moving to a new country and adjusting to a different life with eleven children to care for, Bob’s parents never realized he was deaf, they just assumed he had learning disabilities. Besides not being able to hear, everyone was now talking in a new language. Bob wondered if he had learning issues himself when he could see others communicate so easily, and it was very hard for him. It wasn’t until a hearing test showed he was deaf at 10. Unfortunately, after all that time, his family had grown accustomed to treating him as if he were mentally challenged. It must have been extremely frustrating for Bob who is a very intelligent person.

His memories from the age of ten to seventeen were far from happy. When he was 18, a counselor suggested he go to Gallaudet University in Washington D.C.  His life changed when he was introduced to American Sign Language.

“I think that’s why it’s so important to him now to share the joy of Sign Language with others,” says director Marty Elcan, who directed and produced the popular DVD series Shut Up & Sign that stars Hiltermann.

His credits include; a year’s run on the soap “All My Children,” a guest star in “Cold Case,” several feature films that include, “Children of a Lesser God,” “The Heart is a Drum Machine” and “The Hammer.” Furthermore, he is one of four deaf entertainers featured in the well-received documentary “See What I’m Saying,” and is the drummer with the wildly popular, all-deaf rock band “Beethoven’s Nightmare,’ which performs around the world and will be in France and Russia this year.  Hiltermann co-founded “MUSIGN,” an extremely popular Signing/Mime musical troupe, Deaf West Theatre, a multi-awards theater in Los Angeles,

Hollywood Revealed: Tell us about the band and how you formed it.

Hiltermann:  Back in early 2000, I was thinking about reforming a deaf rock band after a long break since my college days. I contacted bassist, Ed Chevy and guitarist, Steve Longo and they agreed to regroup. We came up with the name, “Beethoven’s Nightmare.” This is in honor of Ludwig Von Beethoven, for his amazing classical music and his worst 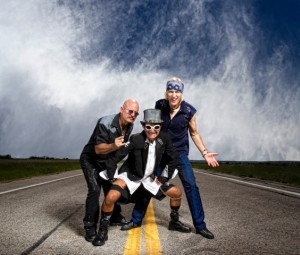 nightmare, which was his deafness. We’re all deaf rockers, hence the name. We play all the original songs with the exception of one cover song, which is “Roll Over Beethoven.” Since we reformed, we’ve rocked across America and our fan base has grown dramatically.  I realize, now, that my band is truly remarkable – one of a kind – the only deaf band in the world. It’s been a great honor working with two extremely talented deaf musicians.

HR: Please explain how you can tell if your music sounds good to hearing people?

Hiltermann: We enjoy rock music because it feels right. We do intensive rehearsals with blood, sweat, and tears until the music is in sync. We tend to invite hearing friends to hear us play and give us feedback. During live concerts, we see hearing people pumping their fists, enjoying our music just as much as deaf people.Many people are astounded that deaf musicians can really play at the same professional level as their hearing counterparts.

HR: What challenges do you see your band having in the future?

Hiltermann: The biggest challenge we have is finding a manager who can help us to crossover into the major music environment. We’ve been together for 12 years since we reformed, and I would like my band to be the opening act for big name bands and show their audiences that we can rock their socks off. I would also like my band to perform on TV such as talk shows, music awards, Saturday Night Live, 20/20, CNN, etc. I just wanted to share with the world how miraculous it is that a deaf rock band can do what nobody ever thought possible. It’s like a freak show that everyone would be curious about. These are the challenges that I see my band having right now, but I’m optimistic.

HR: How do you think you are influencing other deaf students?

Hiltermann: My influence to deaf students has been mostly about positive attitude and believing in themselves no matter what anyone says.  If someone says no, move on to the next yes. They can make their dreams come true by staying focused and working hard. There’s no free ride.

HR: What would you like to see in the future for deaf people?

Hiltermann:  Since American Sign Language has become very popular (the third most common language used today), more and more hearing people are opening up and communicating with deaf people. I would like to see more accessibility, equal rights, 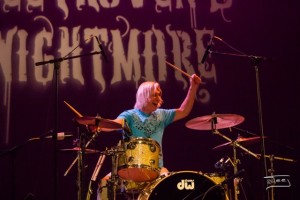 and opportunities for deaf people. They can do just about anything hearing people can does, except hear.

HR: What do you do on the set when everyone else does not sign, how do you communicate?

Hiltermann: One of my skills is lip reading  I tend to understand better when I’m closer to a person, so I can see the details of the mouth movement and facial expression. Sometimes, they need to write down on paper, but usually, they hire a sign language interpreter on the set.

HR: Why do you think you’ve been so successful, is it the struggles?

Hiltermann:  Well, life is full of challenges. My struggles had shaped me into a stronger person. However, one of my on-going struggles had been being hired as an actor in films and TV. There aren’t any roles for me. I once played a hearing role with a voiceover in the movie and it was a success. Everybody thought I was hearing. It has never been done before. I would love to do that again. I believe anything is possible.

HR: I see there is a new band member, how did you find him.

Hiltermann: We’ve been looking for a rock singer who can also sign. I knew the actor and writer, Paul Raci, for many years, and he recently acted with me in the play “Cyrano.” In this play, Paul sang and signed a rock song that just blew me away to heaven. I never knew he could sing like that. Paul is a CODA (Child of Deaf Adults) and used to be in a heavy metal rock band before he became an actor. One day he offered to sing for the band. After discussing with Ed and Steve, it was a big YES from us. Paul just wrote an independent film, Deaf Ghost, in which he will star and feature the band. We’re very proud and honored to have Paul as a new band member.

HR: What is next for Beethoven’s Nightmare?

Hiltermann: This year we’re invited back to France to play for an audience that will be twice the size as when we performed in 2011.  After that, we will be touring in great Russia. We’re very excited and looking forward to these tours. During Memorial weekend, my band will have another intensive rehearsal and then record a new song. The song will be available on iTunes

HR:  What is next for Bob Hiltermann?

Hiltermann: I’ll be giving a motivational speech and conducting drumming workshops for deaf students at Deaf Arts Jubilee in San Diego. Next month, I’ll be hosting and acting for my 4th episode of the sign language educational series, “Shut Up and Sign.” This episode will be called, “What a Wonderful World.”