Adam Meir started acting at the age of 11. He graduated with honors from the top High School for the Arts in Tel Aviv – Ironi Alef, and later served in the Israeli army for 3 years where he received an honorable discharge as a First Sergeant. He studied at Israel’s top acting school, Yoram Levinstein in Tel Aviv as well as the American Academy of Dramatic Arts in Los Angeles.

After graduating he was cast in projects such as Quentin Tarantino’s “Freedoms Fury”, The Oscar Nominated and Golden Globe winner “Waltz With Bashir” and has been a voice over artist in films such as Tom Cruise’s “Mission Impossible 4.” Adam’s abilities as a mime landed him work as an animal suit performer, perfectly portraying apes, rhinos, squirrels and many more. We caught up with him recently at Swingers Diner in Hollywood.

Hollywood Revealed: Hi Adam, How are you?

HR: Tell us about your background and how you got to Los Angeles, becoming once of America’s leading animal actors.

AM: I was born in Hungary and raised in Israel and after my military service and spending 5 years studying acting in Israel I felt that I 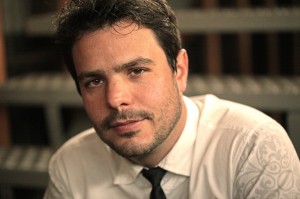 needed bigger opportunities.  I got the chance to study in Hollywood at The American Academy of Dramatic Arts. After I finished my studies, like every other actor out of acting school, I tried getting an agent or a manager and land some auditions.

HR: How did that go?

AM: It was pretty slow at first but fortunately I also had a love for something that many people don’t do anymore, and that is mime and movement performances. By chance I met a teacher named Don McLeod who has been one of the most famous Gorilla actors and mimes in the country for the past 40 years and he hired me for his company. Don realized that I am the same size as he is and that I will probably fit into his Gorilla suits. After a while, every time that there was a Gorilla job and he wasn’t available Don hired me to fill in for him. Eventually I got to meet some more people from the strange world of animatronic creatures and animals and started working with them too. I soon realized that this is a really interesting niche of the industry that most people are not aware of.

HR: You speak four languages. Have you put that to good use in your career?

AM: Yes, I am also a voice over artist as 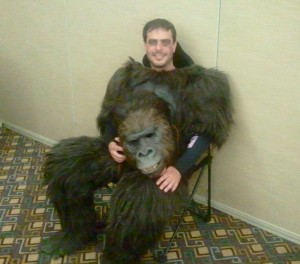 well as an actor. I have done major voice projects such as the Golden Globe winner “Waltz with Bashir” Quentin Tarantino’s “Freedom’s Fury.”  I spoke Hungarian and Russian in “Mission Impossible 4”, Arabic in “Lady Magdalene’s” and many smaller projects. I find languages and cultures fascinating and it’s definitely helpful in portraying and understanding characters.

HR: So what do you prefer? Speaking humans or silent creatures.

AM: I love both of them equally. I think that a performer’s job is more than just delivering lines. Since I was a little kid I had a dream to be diverse and to conquer different disciplines. To this day I sometimes wonder what a tree feels like in the middle of the forest, or what it would feel like to be one of the thousands of ants I see walking in a line on the pavement and what kind of memories could an ancient book could hold. So basically, at some point I decided that I will be all those things if I possibly can. Truthfully, I get just as exited when I get a call that there is a job where I have to play a dancing beer bottle as when I book a role as a mafia hitman.

HR: That’s cool. So what kind of characters are you working on right now?

AM: I am heading off to perform a Venetian Carnival Mime at the Branson, Missouri World Festival and I also just performed as a dancing Chimp in another project. On film I recently finished a role as a retired Mossad agent in “Alongside Night” starring Kevin Sorbo.  When I return from Missouri I will be filming a Game Show Host style character in a brand new, and yet untitled feature.

HR: You recently brought a a squirrel to life in a Pepto Bismo commercial. How does one prepare for that?

AM: Well,  first you need to research the right and true behavior of an actual squirrel.  When you have that done you go and meet the squirrel puppet and start playing.  These puppets usually have a remote control that handles all their movements like lips,  head,  arms,  legs,  sometimes eyes and breathing,  ears etc.  All those things have to move in sync and at once.  So you sit down with your new friend and practice.  Eventually you will have a good grasp and some muscle memory and you can work the puppet on the day.

HR: Well Adam, You are definitely one of a kind in this profession. Thank you so much for your time and good luck with all your endeavors.

AM: Thank you very much.