Actor Ryan O’Neal and his son Redmond were arrested Wednesday morning after authorities claim they found drugs at the actor’s Malibu home. 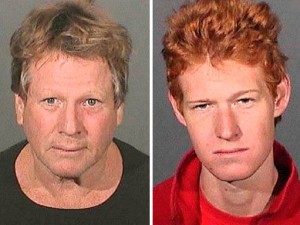 Los Angeles Sheriff’s deputies and probation officers went to O’Neal’s home for a routine check of Redmond O’Neal, who is serving three years of probation after pleading guilty in June to drug possession charges.

Los Angeles County Sheriff‘s spokesman Steve Whitmore said both men had methamphetamine, but the substances still need to be tested.

O’Neal’s lawyer, Mark Werksman however has told People Magazine that the drugs found by police in Ryan O’Neal’s home didn’t belong to him and the actor “will be fully vindicated.”

“Those were not Ryan’s drugs, he doesn’t use drugs, and has nothing to do with them,” Werksman said Thursday. “It’s a dangerous assumption for deputies to have arrested Ryan just because he was in proximity to the drugs.”

Werksman declined to specify how a vial of methamphetamines found by sheriff’s deputies Wednesday ended up in Ryan’s bedroom, or whose drugs they were.

“This situation is very upsetting to Ryan because he’s just trying to lead his life quietly,” Werksman added. “I have full confidence that Ryan will be vindicated.”

Both the actor and his son were released after posting $10,000 bail and could be charged with felony possession of narcotics.