Lakeview Terrace is a a formulaic but entertaining thriller that features a great performance by Samuel L. Jackson as “Abel,” a nasty, bitter cop who is determined to make life a living hell for the interracial couple next door. Strong performances by Patrick Wilson, who holds his own against Jackson, and Kerry Washington as his wife, helps keep the tension simmering until the rote and predictable final 5 minutes that pushes this film into “B” movie territory. 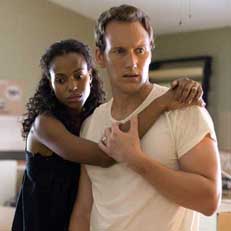 Jackson chews the scenery as a racist widower who takes out his frustrations on his brand new next door neighbors. He is a time bomb waiting to explode from the first time we meet him and we all know what’s coming.  Though we’ve seen most of this story in films such as Pacific Heights and  Unlawful Entry, Lakeview Terrace may still be worth checking out on the big screen, if just for Samuel L. Jackson’s performance alone.