Can a son forgive a father who has altered the lives of his entire family after brief meltdown? That is the question being asked in REDLINE, the new play by Christian Durso currently playing along side Sinner’s Laundry at the Lounge Theatre in Hollywood.

Raymond, (James Eckhouse) is pretty much your every man. He loves rock and roll and 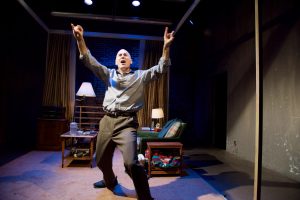 muscle cars. He’s crazy about his kids, especially his teenage son. Though his wife frequently nags and humiliates him in front of his children, Raymond puts up with her–until one day he can’t.

On a road trip with his family along a frigid eastern Sierra highway, Raymond snaps, losing all self control. It only takes five quick seconds, but it’s enough to cause a major and potentially deadly traffic accident. By some miracle Raymond and his family are spared, but the relationship with his wife and kids suffers irreversible damage.

When we meet him some 20 years later and it is obvious that Raymond is haunted and broken by those event from long ago. He has left the city and lives alone in a isolated cabin overlooking the very highway where the accident took place. He regrets his his road rage, and there is 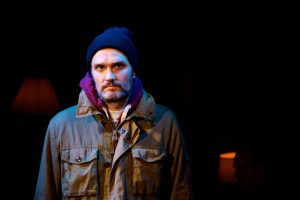 little joy in his life–but on this night there may be hope. Raymond finds a message on his answering machine from his son. Jamie, (Graham Sibley) says he is coming to see him, and Raymond feels he will finally get a chance to make amends. Patch things up with his boy who is now in his early 30s and on probation after a stint in jail. What Raymond doesn’t know is that Jamie is contemplating revenge–and  may even have murder on his mind.

The unsettling story initially unfolds as two separate monologues. First Raymond’s and then Jamie’s. Both actors break the fourth wall as they share their points of view. One might think that a plot conveyed in this manner could grow tedious, but in Redline it is anything but.

Mr. Durso’s writing is spot on and with smart direction from Eli Gonda and deeply committed, passionate performances from James Eckhouse 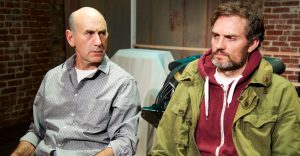 and Graham Sibley, Redline evolves into a compelling, edge of your seat thriller. This is a taunt, visceral theatrical experience and by the time father and son reunite for the final showdown, you can cut the tension on stage with a knife.

Kudos to Rachel Myers for her set design, Josh Epstein for his creative lighting and Peter Bayne for original music and sound. They help make Redline a winner.

When: Saturdays and Sundays through November 19.

Go to www.IamaTheatre.com to find the repertory schedule.