Set in Berlin and inspired by a true story, Tania Wisbar’s romantic drama, THE RED DRESS, currently playing at the Odyssey Theatre in West L.A, explores the intersection of politics and art during the years between the Treaty of Versailles and the rise of Fascism. The play tells story of “Alexandra Schiele,” a famous film actress from a prominent Jewish family, who falls in love with a down-on-his-luck World War I vet, “Franz Weitrek.” Franz parlays his wife’s connections into work as a film director, but when his career takes off making Nazi propaganda films, his wife suddenly becomes a liability.

We caught up with DYLAN WITTROCK who portrays “Officer Dieter Keller” and J.B. WATERMAN who plays “Franz” and asked them to share their thoughts about the show.

HR: Can you tell us how you got involved with this production?

J.B: A cast mate of mine in a different play was working with the casting director of The Red Dress and thought I’d be a good fit for the role of Franz. He encouraged me to audition. I had worked with (director) Kiff Scholl, before and I was lucky enough to land the role.

HR: A play about radicalization seems timely and important. Did you have much knowledge about Germany prior to WW II?

J.B: I only knew about the contradictory images, the liberal and artistic Weimar Republic Germany, depicted in the film and the play, Cabaret, and on the opposite end, the radical plays of Bertolt Brecht.

DYLAN: I knew a little about the years leading up to the war from the American and British standpoint, but I knew very little about Germany itself between the two world wars.

HR: Were you able to sit down and chat with the playwright about the story?

DYLAN: Yes, Tania being around was definitely valuable.

J.B: She and I talked a lot during rehearsals. She shared some of the differences between Franz and her real father, Frank. Franz is softer and a bit more sympathetic, than her father was.

DYLAN: Tania was able to provide a lot of information about what the political and social climate was like in Germany during the period between the two world wars. Her insights helped me to grasp what it would be like to grow up during that very volatile time.

HR: What was your take away from all that?

J.B: I was particularly drawn to the complexity of the German political and social situation  after World War I that she brought to my attention. It was an open marketplace for depictions of the truth and political theories.  The “truth” was being shaped by competing powers.

HR: What’s the most challenging thing about the role you guys are playing? What process did you use to shape and define your character?

J.B: I felt that Franz was not a born soldier but an artist who was forced to go to war. That’s a big piece of what I build the character around. I guess the most challenging thing was having to empathize with the Nazi party and their propaganda about Jews. There isn’t a lot of justification in the script about why Franz feel that way, so I had to come up with it myself.  I think a lot of my motivation has to do with overcoming the character’s PTSD and reclaiming what WW I took from him.  Franz believes that the Jews were suppressing German 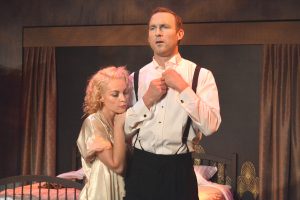 national pride and as an actor I tried to dig into believing that.

HR: What about you, Dylan?

DYLAN: Tania really wanted the audience to see my character, Dieter Keller, as someone who is coming into his own. In the second act he has total control over the other two characters, but he’s still a little green, so he gets very uncomfortable when his authority is questioned. Showing that vulnerability while still maintaining the control that the scene demands is quite a challenge, but it also gives the character nuance and depth. When you’re dealing with a character that has become almost archetypal in popular culture, you need to find every little thing about him that is unique and personal.

HR: So where are you guys from and how long have you been in L.A?

DYLAN: I was born in Lenox, Massachusetts, grew up for a few years in Chicago, then moved to LA when I was 8. I went to college in San Francisco then moved to New York for three years. Been back in LA for a year now. 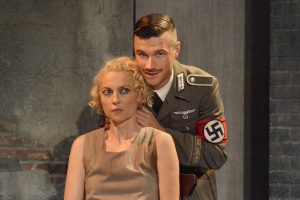 HR: When did you first know that you wanted to be an actor?

DYLAN: I was practically born on stage. My father and brother are both actors, so I grew up loving acting. I was in my first Shakespeare play when I was 5, and I’ve never stopped performing. I questioned whether I wanted to pursue acting as a career during college when I became a Spanish major. I stopped performing for about a year and was miserable, so after graduating I went right back to it.

J.B: For me it was in our community theater production of Snow White. I was only 9 but being onstage was intoxicating. I loved the lights, I loved the make believe, I loved that it was a serious play.

HR: What was your first paid acting gig? Did it get you a SAG or an Equity card?

DYLAN: It was a commercial for JC Penny that I was in when I was 13. It never aired, but I used 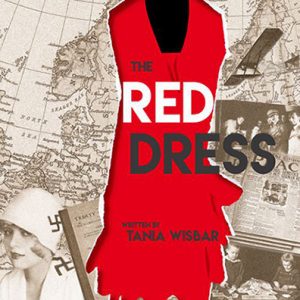 the money to buy a drum set. I got my SAG card from one-liner on the show Power.

J.B: My first paid acting gig was as a non-equity actor in a show at the Berkshire Theatre company in Stockbridge, Massachusetts.  It was $45.00 paid per week, room and board included. I remember staring at that check in disbelief. Someone was actually paying me to do this.

HR: What TV shows have you binge watched lately?

J.B: Transparent and I love Dick. Jill Soloway does such creative, risky and fun storytelling. I love her obsession with her themes; gender, identity, feminism, sex. Even when I get mad and disagree with what she does or says (in the shows) I still love that she has the balls to say them.

HR: What’s next for you guys?

J.B: I’m directing a production of Chekhov’s The Seagull in the spring that I hope will make people laugh a lot and change the world.

DYLAN: I’m looking forward to the release of a couple short films I shot last year. Other than that just trying to audition as much as possible and work on creating something of my own.

HR: Thanks for chatting, guys, and enjoy the rest of the run.

Running time: 1 hour and 50 minutes with one 15-minute intermission.