5 Minute Horror . com is a website with a mission to create the paradigm of 21st century entertainment, combining creativity, professionalism and audience responsiveness for the internet.

Co-Presidents Craig Sabin and Bari Willerford embody 50 years of entertainment industry experience, ranging from theater, to low-budget features, to television, to creating product for HBO and TNT and feature films. Together, they have assembled a professional, innovative team from such fields as video production, entertainment, horror, marketing and graphic design.  We caught up with the due recently to find out more about 5 Minute Horror.

Hollywood Revealed: Tell us how you got the idea for this site?

Bari Willerford: The Doc (Sabin) and I were sitting at Starbucks, or as we call it “the office” complaining about the business. The hardest part of being an actor, or a writer, is waiting for the jobs to come along, so Doc and I wanted to get something started ourselves, rather than waiting around. This was right about the time that 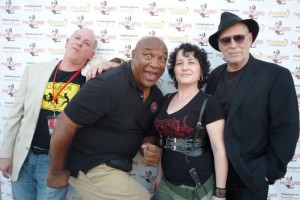 videos started popping up on the web more regularly, and we thought that was something we’d like to be a part of. We didn’t want to do just comedy. I’ve always been a big horror fan, from when I was a kid. One of the highlights of my career was doing a movie for Corman’s company. The Doc has been in his share of horror movies, like “Slime City” and “I Was a Teenage Zombie.” Somewhere along the line, someone held up their hand, with five fingers. And it all just clicked. 5 Minute Horror.

The question became, could you scare someone in 5 minutes? Create a character and a situation, some tension and a twist. We tried it out with our first three shorts, and I got to say, they’re pretty awesome. We also have short versions of 5 Minute Horror movies, called Scares. We have a Green Screen Challenge feature, where fans contribute their own vision to a short green-screened scenario that we produce. We have public domain footage, and our blog. We also have what we call “Test Reel Footage” where we show film productions testing out their special effects. It’s a lot of features, and features you don’t see on most horror websites. No reviews or previews…just original horror.

HR: what is Zombie Radio Show?

Craig Sabin: Zombie Radio Show is essentially a weekly horror-themed comedy podcast. But it’s really so much more than that. After doing over a year’s worth of episodes, it’s grown into a radio comedy show in its own rite, with complex characters and situations, all of them horribly wrong.
The show revolves around Jimmy Rudolph, a jazz DJ bro 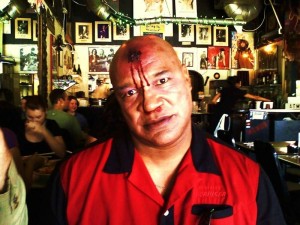 adcasting out of New York City after the Zombie Apocalypse. So a typical episode might start with Jimmy saying “A zombie family stormed Gracie Mansion, killing the Mayor. Now here’s some Charlie Parker…” Jimmy is one of those pompous jazz lovers, with no idea that his music and profession have no bearing on the world anymore. He has a pragmatic sidekick named J-Bo, who is a massively gifted zombie killer, and frequently forces Jimmy to confront the ugly world. But Jimmy keeps his rose-colored glasses on, insisting there’s nothing wrong with New York that the right Miles Davis mix won’t cure. And in a sense, he’s right.
We have awesome vocal talent contributing to the show, including James Mathers as Jimmy and Angelle Gullett as J-Bo. It’s slowly building a following all its own on Twitter and YouTube. You can catch the episodes on http://zombieradioshow.com

HR: What are the biggest challenges you have been facing?

Bari Willerford: It always comes back to coin. We’ve created some fantastic content, we’ve made a slight splash in the horror world, and we want to do so much more. But finding a way to fund the consistent production of short movies, without asking everyone in Los Angeles to work for free, is hard. We’re moving forward with our merchandise page, the Gore Store, so that people can purchase the bloody hand and wear it on their chest or their head, and that should get us the money we need to create our next round of films.

HR: What have been the biggest successes yet?

Craig Sabin: We’ve had a lot of little successes, with Zombie Radio Show and the Green Screen Challenge. If I had to choose, I’d say “Supersex” was our biggest winner. It’s been featured in many film festivals, and it won best short on Greg Lamberson’s Slime Guy website, which was a big honor.

HR: How are you overcoming the costs related to filming and building your product?

Bari Willerford: We’re trying a lot of different things, like merchandise, as I said before. But one of the exciting things we’re putting together is an indiegogo campaign for our DVD. We’ve edited together a few 5 Minute Horror 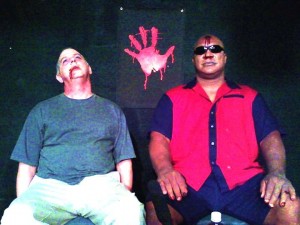 highlights, with some all new material, and we’re putting it together as a DVD. We’re turning to the fine people at indiegogo to help us raise the money to press out the discs, so that we can sell them at festivals and horror cons in the area. In the video, the Doc and Gruesome (that’s me,) are sort of the horror hosts of the content, taking you on a tour of the dark side of Pasadena, which is where we live and work. Pasadena has an image as a home owner’s paradise, and we’re doing what we can to destroy that.

HR: What is your vision of this business?

Craig Sabin: Well, we’d like a million hits a day and buckets of cash, but short term? I think we want to be the go-to website for quality short-form horror. Not just our stuff, but the best short horror from all over the world, found and featured on 5 Minute Horror. It would be an awesome place for filmmakers and horror fans to hang out, discuss special effects and green screen techniques, and see some of the most interesting horror being shot.

HR: How does the partnership work?

Bari Willerford: The partnership works? Who told you that? No, we have fun, basically. We come up with sick stuff that we’d like to do, and we figure out how to do it. Sometimes it takes us longer than we’d like. I’m kind of the horror enthusiast, and most of my ideas are shout-outs to the genre, to the stuff I loved as a kid and still love today, the best or the cheesiest of horror. Doc, on the other hand, is just sick.

HR: So in what capacity can someone use your expertise?
Craig Sabin: We can do production on a shoe-string, both video and audio, in all stages. We’re editing our own material now. We’re 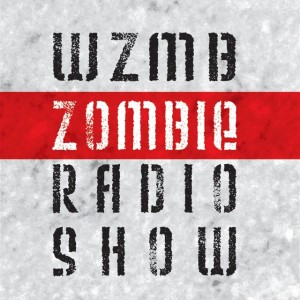 getting good at social media marketing and working the festivals. We’re learning how to create merchandise. We’re both writers, so we know how to construct a solid story. We can break down and build up scripts in all genres. Bari is good at producing and directing readings. We’ve even started learning about web construction and coding. When the budget insists that everything is a DIY project, you can’t help but develop expertise, which is growing everyday.

HR: Give a little background to the pictures provided?

Bari Willerford: That’s Craig “Doc” Sabin and me, Bari “Gruesome” Willerford, on the set of our shoot for the Bloody Shorts Film Festival. The Bloody Shorts is an online short horror contest that 5 Minute Horror sponsors. We’ve done it once, and we’ll be setting up another one soon. We had make-up artist Brittaney Disston come in and zombie us up. Doc was a strangled zombie, and I was a head-shot zombie—because who the hell would try to strangle me?  The Bloody Hand in the back is our logo—we put that up whenever we can, it looks so cool!

HR: Fill us in on the projects that are coming up and the timelines of Indigogo?

Craig Sabin: Zombie Radio Show is an ongoing series, so new episodes will post every Zombie Monday. We’re also creating a new character based on pictures we took years ago, a sort of sadistic, serial killer Mom, a cross between June Cleaver and Charles Manson, and we’ll be shooting some short horror films based around her. We’re also putting together another batch of “Scares” and shooting more episodes in our ongoing “Scenes from a Marriage” series.  But what we’re really excited about is our indiegogo project. Starting in July, we’ll have an indiegogo page, trying to raise funds to press out our DVD. We’ll be beating the drums for two months, trying to get the word out and getting people to donate. Once the DVD is pressed, we’ll be selling it at local Pasadena video stores, as well as carting them around to horror conventions, such as Pollygrind in Vegas, and the Zombie Fest in Palm Springs. This is the first time we’ve ever sought funding, so we’re eager to see how that works out. We certainly have a solid history, and some excellent work to show for our efforts.

HR: Thanks for talking with us.  Give us the name of the website one more time.

Craig Sabin: Sure.  Its www.5minutehorror.com