“Many of you who read this are going to find it very offensive,” warned an ad on Craigslist. Continuing into those four paragraphs, playwright, Ruth Fowler not only wondered who would create such an ad but quickly became even more curious to know who would answer it?  She created the play bled for the household truth, as a result, and it is now having its timely world premiere at Rogue Machine Theatre in Los Angeles.

The characters in bled for the household truth are raw, honest, and desperate to connect in a way that helps them to forget their pain and makes them feel safe. Director Cameron Watson took on this project because he says, “I hadn’t read a play like this…ever. It fascinated me, gripped me…and just wouldn’t let go”

Benjamin Burdick plays “Keith,” the character who wrote the ad, and Alexandra Hellquist play “Pen,” who answers the ad. Equally fascinated, they were eager to participate in the production and were happy to talk with us about their passion for this piece.

HR: Was your first impression of this play similar to how you think of it now? If not, how has it changed?

Alexandra: I remember getting just a few pages in and feeling my heart race, 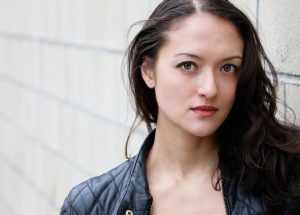 and my breath catch, and thinking “yes, yes, yes, yes” and wanting to be part of this story so very badly. That feeling has only deepened with time. I was also scared, in the best way. Daunted by the scope of it, artistically and also technically. But thankfully, the whole team – with director Cameron Watson at the helm – has been the safest, most loving group of passionate artists to work with.

HR: What about you, Benjamin?

Benjamin: My first impression was that this play was hauntingly beautiful; a difficult examination of humans in all of their complicated glory. I still think that, but it’s deepened tremendously after living with the character, Keith. There’s fragility, and I didn’t immediately realize how deep it ran. I am still haunted by it, but now on a much more visceral level. We’ve talked about two currents running through the characters and this play – the surface river that seems to be flowing. And the undercurrent – the “river of shit”- that flows beneath us and that actually moves us in whatever direction it chooses.

HR: How did you guys get involved in this production?

Alexandra: When I moved here from New York, I went to see my friend, James Liebman, in Rogue Machine’s production of Greg Kalleres’ Honky. It was the first play I saw here, and I was totally blown away. The script was razor-sharp, uncomfortable and hilarious. The whole production was brave, and boundary-pushing. I knew two things that day; One, I could actually stay in Los Angeles, because there was friggin’ great indie theater here; and Two, I definitely wanted to work with Rogue Machine. The Casting Director, Victoria Hoffman, brought me in for the role and I worked my *arse* off for the callbacks, and the rest is something approximating history.

Benjamin: I’ve been a member of the Rogue Machine for a long time, though 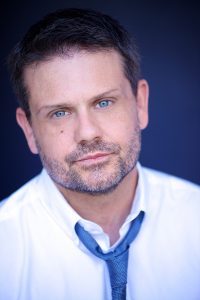 I’ve never done a show here. I got an email from Victoria, and I threw my hat in the ring for the role of Keith. There were too many good things going for it not to at least come in and audition: Cameron Watson was directing (he is incredible); John Flynn was producing (equally incredible); and it was being staged at The Rogue Machine (one of the best companies in town). So I read for it and got called back. Coincidentally, Alexandra and I did a scene together in the callback. I walked out thinking, “She’s Pen. For sure.” I didn’t know what they thought of me, but I knew she was Pen.

HR: Where are you from? Have you known any people like your character throughout your life?

Alexandra: I was born in the Philippines, and I’ve lived in Japan, England, Australia, France and Italy before coming to the US, alone, for college. I think there’s a lot of my past and my history that echoes Pen’s. I know what it’s like to be scared about one’s immigration process. And, like almost every woman I know, I know exploitation. I know assault. I know abuse. I know the particular and precarious power of youth and femininity and sexuality. I know survival and refusing to be a victim. I know the feeling of homelessness. I know putting up with seemingly insane things because of desperation, and because it seems like the least terrible option at the time. I feel like everything I’ve ever gone through is helping me to unearth Pen. 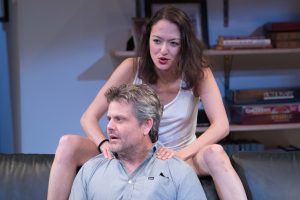 originally from a small town in Idaho. As for people like Keith…it’s hard to say. Because I guarantee you that the people who work with Keith in his office don’t know about him, or his arrangement. That’s the beauty of Ruth’s play. It opens the curtain into lives that certainly exist (the Craigslist ad was real). So I haven’t been aware that I’ve known people like Keith, but I can guarantee you that I have.

HR: How did you each prepare for this role?

Benjamin: Most importantly for me, I think, is that I promised myself never to judge Keith. Ever. By doing that, I am able to live truthfully with Keith in all of his complexity. I also went on Craigslist and looked for ads similar to the one Ruth saw in New York, and 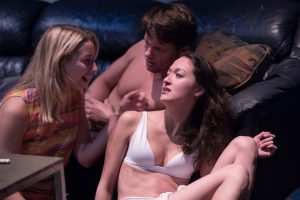 wrote to the posters. I created an extensive backstory for Keith. There is a section of the play that was cut, but it told a wonderfully vivid story about Keith in his teen years. And even though it was cut, I held on to all of those details to build Keith’s story. I imagined what brought him to his current place in life, and worked with it until it was a part of Keith’s fabric.

HR: Do you feel that this play ties in with the current climate of sexual harassment accusations?

Alexandra: It’s incredible that this play is being produced now. Given this surge of courageous truth-telling and brutal acknowledgment of the rife ubiquity of exploitation and assault and abuse of power, that has been part of our daily existence for so long. Ruth actually wrote the play seven years ago, and had it turned down again and again by producers. She was told that it was disgusting, or too graphic, or demeaning to the actors.

As for the conversations finally happening about abuse and assault, silence and power – I think the stark ordinariness of this all is something that the play illuminates beautifully. This stuff has become totally normal, taken utterly for granted as the cost of living, of merely existing as a woman.

And that’s the tragedy of it – that the abusers and victims aren’t outliers. This stuff is intimately woven into the fabric of our daily lives. This national conversation we’re suddenly having – maybe this is a start for real changes to the fabric. The fact that the writing of ‘bled’ predates this sudden convulsion of awareness is very important. It was not written in response to what’s emerging now – and partly because of that, I think, there are no cleanly-cut villains or heroes in this piece. Everyone is complicit and ‘bled’ is able to look at what perhaps made us so. It doesn’t promise redemption, but it hints at another way, another possibility of being.

Benjamin: Because the play was written well before this came to light, it’s not a response to the disgusting stories coming out daily about men in power and their abhorrent behavior. There are similarities in the structure of the relationship, though, that are hard to ignore, but in order to play Keith objectively, it’s not something that I feel I can delve into without placing judgment.

HR: What is your favorite thing about this play? 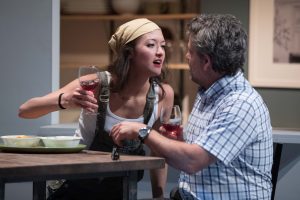 without sentiment. Raw truth without melodrama. Humor that leans into discomfort, and a tension that I love.

Benjamin: The collaborative nature of everyone involved. The ensemble is incredibly gifted and gracious; Cameron creates an atmosphere where one feels not only allowed, but obligated, to explore and experiment and challenge.

HR: What is next for each of you?

Alexandra: I can work local-hire in a bunch of places, like NYC, Atlanta, and London, and I LOVE traveling for work. But I’m newly based in LA and I can’t wait to branch out here (Casting directors – I am here! Hear me roar!!!). I’m also looking for an agent that gets my weirdness, and free spirit – someone who’ll appreciate that I rush headlong into exquisite torment. And of course, I want to take Pen, and ‘bled for the household truth’ as far as it’ll go – I think it’d make a great, incredibly uncomfortable, film. I’d love to make that happen.

Benjamin: Sleep. I kid. Mostly. Though a full night of sleep without waking up and thinking about the play or Keith or a movement within a scene…that would be nice. Then it’s back to the hustle. Working to find gigs, writing my own material, etc. But when I work on such dense and difficult material, it makes other auditions seem like a breeze. I have a confidence when I’m working on a play that I don’t have at other times. That’s especially true with “bled.” I walk into a TV audition and think ‘I just navigated a minefield last night in the theatre. This is nothing. So I’m confident and hopeful that more work will come.