Don’t ask Billy Bob Thorton about his acting career. Not when he is plugging his band the Boxmasters. A Toronto radio host found out the hard way when Billy Bob got agitated, 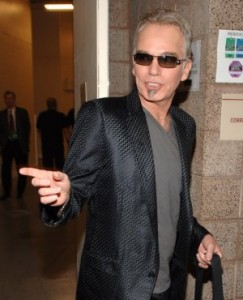 began lecturing the guy on how to do his job, claiming the host, Jian Ghomeshi of the CBC Canada radio show Studio Q, was instructed not to ask the actor about his movie career. Thornton ultimately walked off the show.

On tour with Willie Nelson, Thornton was reportedly under the influence, but his representative, Arnold Robinson, says that is flatly untrue. “Billy Bob clearly just had an issue with the guy,” Robinson says. Robinson confirms that while it’s true Thornton does not like to be asked about his movie career while promoting his band, the radio host was never “instructed” to avoid the topic. “Bottom line: We don’t tell people what questions they can or cannot ask,” Robinson says. Apparently, Thornton just wasn’t in the best mood this morning, but he doesn’t seem to have had a change of heart in the hours since. When asked if there were any apologies or group hugs after the segment, Robinson laughs. “I don’t think so, no.” See the entire interview below.