E! is reporting from an un-named source on the “New Moon” film 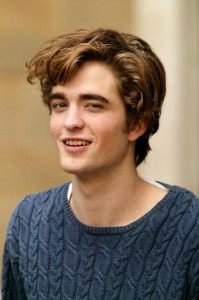 “He stinks. I mean, it’s awful. He never showers, and it drives people on the set crazy,” says a source who wants to remain nameless but who claims to work in close proximity with Pattinson. Asked to elaborate, the source claimed that the actor “completely reeks.”

GQ Magazine has just profiled Pattinson in it’s April issue. In the article the actor reveals a lot about his on-screen sex life, describing in detail what it’s like doing a totally nude love scene with another male actor, Javier Beltran in the film, “Little Ashes.”

“I haven’t even done a sex scene with a girl, in my whole career and here I am, with Javier, doing an extremely hard-core sex scene, where I have a nervous breakdown afterward. And because we’re both straight, what we were doing seemed kind of ridiculous.”

It gets worse. “People were watching. People who spoke a different language. And they were laughing. And it wasn’t even a closed set,” Rob complains. “There were all these Spanish electricians giggling to themselves.”

Incidentally, you can catch Pattinson in the film,”How to Be” premiering this Saturday at the brand new Burbank Film Festival in Burbank.  All screenings are on the campus of Woodbury College.