Based on the novels of Håkan Nesser, wherein a retired northern European chief detective opens up a used book shop for his leisure time, but cops – friends from the force, or not – keep coming in to test his skills on difficult cases. In Season One, Mr. Van Veeteren (Sven Wollter) tackles three difficult cases (well, if they weren’t difficult would we care as much?), suspenseful psychological thrillers: 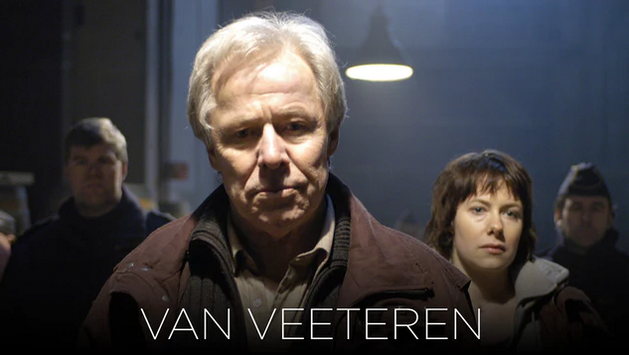 Van Veeteren finds retiring from the police force is easier said than done when two decapitated bodies are found in quick succession. The matching MO in the two grisly murders brings the investigation teams of the fictional cities of Maardam and Kaalbringen together – a collaboration that is not without its problems. And we are introduced to his best protégés: Münster (Thomas Hanzon) and Moreno )Eva Rexed).

When the body of a wealthy wine merchant washes up on a beach with multiple stab wounds, police fear a media frenzy. But the quick arrest of the man’s former partner in the face of damning evidence promises a quick resolution to the case.

Moreno and The Silence

When a girl is murdered soon after leaving a closed religious community, Moreno faces a difficult investigation as the community closes ranks and refuses to cooperate. When another girl is abducted and her bloody fingernails mailed to the police, tongues begin to loosen. The best of the three as they investigate and attack the sordid and misinterpreted basis for the religious killings. Spooky.

It’s refreshing to watch an elder character, sans physical or psychological problems, continue to use the logic in his career as he settles into a semi-academic slumber. And the writing (Niklas Rockström for Carambole, Erik Leijonborg for Monsters Fall, and Björn Carlström and Stefan Thunberg for Moreno & the Silence), plus the overall superb direction of Daniel Lind Lagerl make the end results skillfully realistic and entertaining.

In the Bonus section, novelist Nesser (in perfect English) describes why in all ten of his novels (most of the ScandiNoir books seldom go past ten – apparently, it’s what’s expected out of this oeuvre) he has deliberately not placed them in a specific country or city, except that they are assumed to exist in Scandinavia.