Hollywood has been watching and waiting for Tom Cruise to fail. The man whose films have grossed $6.5 BILLION dollars in box office receipts has become a favorite of gossip mongers and nay sayers because he has chosen to live his life as a Scientologist and jumped on Oprah’s couch proclaiming his love for then girlfriend, Katie Holmes.

After a two year wait, Cruise’s new film, Valkyrie is about to be released.

Directed by Bryan Singer, with an original script by Christopher McQuarrie, Valkyrie 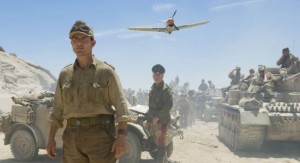 was conceived  as a dramatic showcase for Cruise. It was also a high-profile effort to kick-start United Artists, the MGM unit of which he and his producing partner, Paula Wagner, had become part-owners. The film also stars Bill Nighy, Kenneth Brannagh, and Tom Wilkinson.

Last Friday, MGM/UA previewed the Valkyrie trailer in front of the new James Bond movie “Quantum of Solace.” MGM/UA executives nervously held their breaths as audience watched.  Cruise loomed in all his uniformed glory as Claus Schenk Graf von Stauffenberg, Hitler’s intended assasin.  The trailer played without a single boo or holler, much to the relief of the suits.

It was not a bad start for a movie that has become unusually tangled in the fortunes of both its star and the company that made it.

Critics and bloggers have questioned everything from the American accents used in the film to the eye-patch that Cruise’s character wear in the movie.  The New York Times recently published a lengthy piece implying that if Valkyrie, in which Cruise plays a German officer who tried to kill Hitler,  doesn’t explode at the box office, Tom’s career may be over.

Why are so many in the media so anxious to destroy this movies before the public even gets a chance to see it?  The Valkyrie trailer looks taunt and exciting.  The cast are all seasoned professionals.  Director Bryan Singer does not make bad films.

Many reviewers are falling all over themselves praising the other Nazi themed movie out this fall, The Boy in the Striped Pajamas.  Frankly, that film, though beautifully shot and well acted, lacks credibility and requires a complete and utter suspension of disbelief from audiences. The actors in Striped Pajamas talk with upper-crust British accents.  Where is the outcry for that blunder?

Tom Cruise is a credible movie star who has proven his appeal since early film such as Taps and Risky Business.  He is one of the highest grossing actors on the planet. Lets allow film audiences to judge Valkyrie on their own terms without input from the bitchy, judgmental press corp. who gloat when others fail.