Actor Randy Quaid claimed Thursday that there is a “malignant tumor of star whackers in Hollywood” out to ruin his life and career.

“I am being embezzled from by this monstrous ring of accountants, estate planners and lawyers who are mercilessly slandering me and trying to kill my 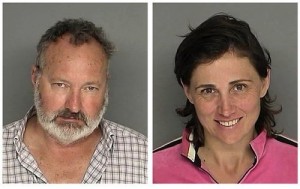 career and, I believe, murder me in order to gain control of my royalties,” Quaid said in a prepared statement outside the Immigration and Refugee Board in Vancouver. “I wish to return to only one thing: work.”

Quaid claimed he and his wife Evi are victims of a 20-year conspiracy. He blamed bankers, studio executives, former financial and legal advisers and even his brother Dennis Quaid for their legal troubles.

Quaid claimed eight actors he worked with died “mysteriously.” He said friends Heath Ledger, Chris Penn and David Carradine, were “whacked” and that Britney Spears, Lindsay Lohan and Mel Gibson “are being played to get at their money.”

The couple’s ex-private detective Becky Altringer told reporters that the the conspiracy theory is false. Altringer said the only one who poses Randy or Evi Quaid danger is Evi Quaid.

The actor’s bid for refugee status in Canada at the Immigration and Refugee Board was postponed to Nov. 8. They are also due in court in Santa Barbara on November 2nd. Their attorney said they would attend if they are “legally obliged” but they would first “strategize” their next move.