With over 400 productions playing at the moment as part of the annual Hollywood Fringe Festival, I am making an effort to see a good number of them. I have already reviewed the excellent, “And Now It’s All This,” a play that examines the repercussions of John Lennon’s famous comment about the Beatles being bigger than Jesus, currently at the Complex Theatre on Santa Monica Blvd. This past weekend I checkout out five more Fringe shows.

Tommy’s Room, written, directed and produced by Don Storm, is set at a Christian University in 2008. With sharp, edgy dialogue and powerful, convincing performances from Conor Sheehan as “Tommy” and Jesse Stevensen as his best friend, “Pete,” the play covers a timely subject as it delves into frat boy culture and the dire effects of toxic masculinity. Storm ably builds the momentum, though he does at times have us twidling our thumbs, like when the boys play video games, or when they both exit the room, leaving the stage empty for what seems way too long.

The play, however, takes off like a bullet once the inciting incident is introduced and quickly builds to it’s violent conclusion.

Good use of rear screen projection, and excellent singing and guitar playing by Jesse Stevensen only adds to the caliber of this production. Tommy’s Room shocks you as it breaks your heart.

Can rescheduling family breakfast really lead to a life of crime? That is the lofty question tackled in the hillarious musical, Pockets currently on the main stage at the Broadwater Theatre. The tongue in cheek production is set in the old British-ish kingdom of Crumpeton on it’s most important day of the year, Crumpet Day. “Bellamina,” a young girl turned pickpocket who names herself Pockets, accidentally becomes swept up in a criminal uprising against the iron fisted Duchess, who also happens 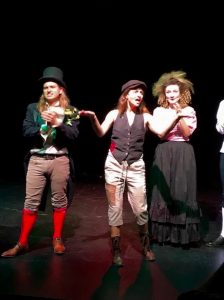 to be her mother.  Musical hijinx insues and I can promise you that you will leave the theater with a smile on your face.

Toe-tapping music from Branson NeJame and fun lyrics by the Robot Teammates, the group who also wrote and produced the show along with Dave Reynolds, Pockets is the feel-good musical of this year’s Fringe.

The enthusiastic and talented cast of 16 play multiple characters as they bring the story to life. Standouts include the excellent Chris Bramante as Veegan, Dave Reynolds in various roles, Kat Primeau as The Dutchess, and Molly Dworsky as Pockets, but truthfully, there are no slackers here. Everyone on stage gives it their all. A four piece band, Duke Spookum and The Jimmy Jammers, provide tight musical accompaniment, and Pockets is one that should not be missed. Perfect for kids of all ages. 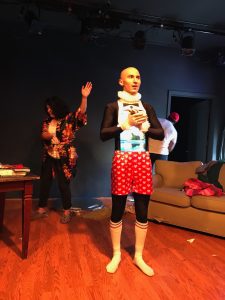 her former lover who has left her for another woman.

Her humanoid manservant, Alfred (Corduroy Chapman) tries to focus Hedelle, but after his most recent program update, he begins to discover his own consciousness and takes off to experience life on the outside.

The play makes great use of computer screens and rear projection as it delivers some laugh out loud zingers. I especially liked the “Adobe Flash Player Is Out of Date” gag, something most of us have encountered.

Corduroy Chapman delivers a touching performance here as Alfred. Despite his clownish appearance, his humanoid shows restrained emotion as he struggles with self discovery. Malachi Beasley shows up late in the play as Hedelle’s lover, Lamar. He is a strong presence in a small but effective role. A more nuanced performance from Ammy Ontiveros could have balanced the dynamic, but all in all, The Human(oid) Experience is a smart, funny piece with heart.

With an experienced and accomplished playwright, a talented cast who give it their all as well as an Emmy Award-winning director on board, my expectations were pretty high for Hoboken at the Complex in Hollywood. Unfortunately, Hoboken is a mash-up of situations that never quite draw you in enough to care.

The story concerns “Sam,” (Mary Ellen Everett) an actress who meets a wealthy, volatile Irishman, “Jack” (Patrick Cronen) who promises to make her dreams come true. Her friend, “Erica” (Makaila McMaster) meanwhile gets involved with “Niko,” (Christopher Valente), a screenwriter who is trying to get his movie made. Erica and Sam plot to have Jack fund Niko’s film so they can act in it. We soon learn that all of these characters have secrets. No one is who they claim to be and at the end of the day, no one comes out a winner.

While the final reveal is compelling, the story takes way too long to unfold. The play runs 90 minutes, the length of a movie, and many of the scenes are underdeveloped. There is little nuance in this production. Instead, there is a lot of making out to bad disco music, a lot of distraction, and misdirection. While the actors give it their all, it’s almost as if they know something is amiss. At the performance I saw they didn’t even return for a curtain call.

“Power Lunch” at the Complex Theatre in Hollywood packs a lot of topical material into its 45 minutes running time. The concept is bold and provocative but the show is hamstrung by how much it tries to communicate.

Writer, (Academy Award winner, Alan Ball) unleashes a flurry of punchlines during a verbal sparring match between Man (Joel Flynn) and Woman (Maddison Bullock) where each reveals the flaws in the ways society expects them to interact. Gender norms are ripped apart as the two play an intriguing game.

While the talented cast their best, the onslought of dialogue is sometimes too much for the audience to digest.

Michael brings some relief as a who intends to present the daily specials but ends up being used as a tool to further our characters points of view. Like most third wheels he initially complicates an already prickly situation yet manages to emerge as his (or her…?) own exciting personality. Another nice moment comes towards the end when Woman lets the game rest so we are finally allowed to see the real person behind all of the social masks. Joel Flynn as Man is on point with his witty retorts and Jared Boghosian should be applauded for keeping this show on a solid path. It’s unfortunate that though the cast is talented, “Power Lunch” lacks the clarity needed to make a meaningful impact.