“God Forever, Beatles Never” and “Go Home Beatles” were just some of the derogatory slogans painted on placards during protests against the world’s number one rock band in 1966. Encouraged by the Christian right, kids all over America and the UK were suddenly smashing Beatles records and burning their Beatle wigs.

The tirade against the Fab Four sprung from a misguided statement John Lennon made to a young British journalist named Maureen Cleave. “We’re more popular than Jesus” Lennon 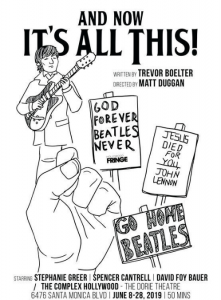 proclaimed after a few drinks and a rumored unsuccessful attempt at a fling with Miss Cleave. “I don’t know what will go first,” he asked, “rock and roll or Christianity.”

Lennon’s faux pas slipped under the radar when it first appeared in The London Evening Standard, but when it was reprinted five months later in an American teen magazine, all hell broke loose. The Beatles were about to embark on their third US tour and the controversy suddenly became a huge headache. The Klu Klux Klan made credible threats to assassinate Lennon (and Ringo Starr, who they mistakenly believed to be Jewish) causing the Fabs to live in fear for their lives.

The only thing that could possibly stop the chaos was for John Lennon to apologize, but claiming he was sabotaged and taken out of context, the Beatle refused.

This stalemate is the subject of AND NOW IT’S ALL THIS! an entertaining new play making it’s American Premiere at the Complex Theatre as part of the 2019 Hollywood Fringe Festival.

Clearly having done his research, writer, Trevor Boelter takes us back to Lennon’s fateful encounter with Maureen Cleave and shows us the genesis of his claims. The dialogue here is filled with humor and feels most convincing. Though none of us were there, it’s easy to imagine that Boelter has hit the nail on the head with this “fly on the wall” point of view.

What also elevates this production are the stellar performances from it’s talented cast.

David Foy Bauer rocks it as John Lennon. He artfully captures Lennon’s physicality and shows us the man’s caustic, cutting edge humor. Foy Bauer looks and sounds like Lennon but this is far from a Beatle impersonation. He is a strong actor who ably reveals Lennon’s sensitivity, allowing us to see the Beatle’s pain.

Stephanie Greer commands the stage as the calculating, manipulative journalist. Her “Maureen Cleeve” is confident and self assured as she faces off againt the cocky rock star, ultimately getting the upper hand. Greer has played this role in the UK and it shows. This is a splendid performance.

Spencer Cantrell is solid as the embattled Beatles’ manager, Brian Epstein who nervously tries to keep the Beatle machine moving forward while Trevor Boelter as Reverand Nicodemus Deluxe brings a few laughs and some much needed tension relief as he preaches fire and brimstone.

Director, Matt Duggan keeps the action fluid, making good use of the small stage. Kudos must also go to Cristina Waltz for hair and makeup. It’s spot on, as is the wardrobe, particularly the Beatlesque outfits worn by Foy Bauer.

Ironically, the “we’re bigger than Jesus” fiasco was one of the reasons the Beatles stopped touring and became a brilliant studio band, sustaining a 57-year career.

And Now It’s All This is sharp and insightful as it sheds light on the scandal that is now a part of Beatles history .

Put this one on your “must see” list for this year’s Fringe.