The devil is in the details of Daytona, a play making its American premiere at the Rogue Machine Theatre in Hollywood. Written by Oliver Cotton, produced by John Perrin Flynn and beautifully directed by Elina de Santos, the story is set in 1986 where we meet a couple of aging holocaust survivors, Elli (Sharron Shayne) 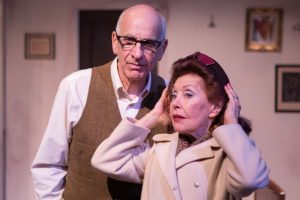 and her husband, Joe (George Wyner). Married right after the war and still trying to leave the past behind, Joe and Elli are trying to enjoy their twilight years. Joe is at the tail end of a career as an accountant. Elli loves ballroom dancing, and the two of them are currently excited about a competition the following evening.

When Ellie leaves to visit her sister, Joe is stunned to find a man ringing the doorbell of his Brooklyn apartment. It is his brother, Billy (Richard Fancy), someone Joe hasn’t seen in over thirty years. Billy had disappeared without a word, taking some of Joe’s money with him. It’s an awkward reunion and after the shock wears off, Joe demands answers.

Without giving too much away, we learn that Billy and Joe were in a concentration camp together. Since leaving 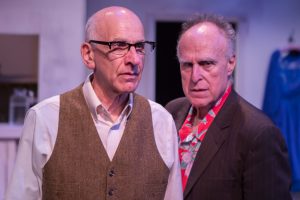 New York, Billy changed his name, married a Christian woman and has been living an ordinary, unfulfilled life in the mid-west. It is when Joe learns that his brother committed a violent act of revenge in Florida, and is now on the run from the law, that the story really begins to pick up steam.

When Elli returns she is equally shocked to see her missing brother-in-law and soon it becomes clear that there is a complex family drama in play. A twisted dynamic that goes back as far as 1945. As the tension and the urgency amp up we realize that there may be no happy ending here, which is sad as these survivors certainly deserve peace of mind.

Despite some fluctuation with her German accent, Sharron Shayne is powerful as the heart-broken Elli. She wears her pain on her sleeve as she confronts what could have been. George Wyner is believable as a man resigned to 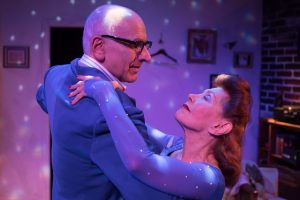 play the cards that life has dealt him, his inner rage swept under the carpet long ago.

Richard Fancy’s slow delivery seems odd at first but as his story plays out, he manages to make you care. All three performers are seasoned pros and have put their hearts into this play.

Despite it’s running time of two and half hours, (including a ten minute intermission), Daytona manages to get under your skin. It deals with the loss of love, the will to survive and the difficulty of letting go, it’s tragic, fragile characters are not ones you are likely to forget. 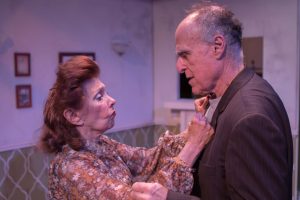 Tickets: $40.00 Purchase at the box office starting at 7:30pm the night of the show. (Availability is limited).