As a fan of fairy tales, writer Jennifer Rowland has created an emotional thriller for adults, particularly harrowing for those who have parented teenagers. Writing in metaphor can be tricky, and yet the type of theatre audiences that frequent the Skylight Theatre don’t seem to mind checking their expectations, for literary realism, at the door.

An adventurous undertaking, which Rowland describes as an “allegory about parenting,” the gist of the family tale describes two perspectives of a possible abduction as a couple (now separated) meets to pack up the old cabin the woods, and to rehash old wounds. It would be the 18th birthday for the child that is now lost to them. Might she show up to blow out the candles on the cake?

The Lost Child is 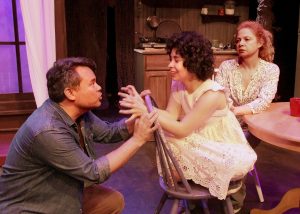 one of two fairy tale-like world premiere productions now running at the Skylight Theatre, a place known for developing new works. The other production, The Devil’s Wife, by Tom Jacobson, is described as a “steampunk fable of Gothic proportions.”

Jennifer Rowland says that “parenthood is harrowing – but it’s also humbling, and I think that people will laugh (and maybe scream!), in recognition of that paradoxical situation. Both of these plays at the Skylight live at the intersection of the real and the supernatural.”

During an interview, Jennifer explained more about the inspiration for her production.

How did the idea for this play come about?

The Lost Child is an allegory about parenting. I love fairy tales and magic realism and I’ve always been fascinated by changeling stories, where a person is taken and a magical imposter put in its place. I was doing research on child kidnapping stories and what happens to the parents whose children never come back. I know a number of parents who have children that are dealing with very serious mental health issues or substance abuse. A mother said to me, “the child I knew is gone,” and that stuck with me. As I was writing the play, I realized that every parent loses their child, that’s normal and healthy, but it’s still a loss. The adorable, charming creature of 5 is never coming back and you as a parent have to accept that.

What do you want The Lost Child to communicate, and what do you hope that audiences gain from seeing your play?

Parenting is a roller coaster ride that brings out unimaginably 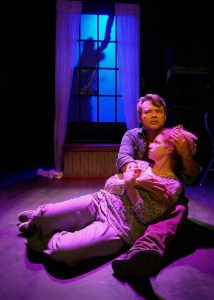 profound and contradictory emotions. You are shocked at the depth of love you have for your child but there are times when you want to wring her neck! Doesn’t mean that you do (most of us don’t of course) but it doesn’t mean you don’t have those feelings. When your child grows up and leaves home, that’s a good and natural thing, but both the parents and the child have to metaphorically kill each other off so that the child can become an adult and the parents can regain their own lives. I hope that The Lost Child makes you feel like you’ve been on a scary, funny, thrilling ride but that its cathartic at the end. Go home, give your kids a big hug and tell them you love them!

Do you have a consistent approach for the way you begin a new work?

I don’t think so… but my husband says I am remarkably consistent. I skulk about for a month or two claiming I am “written out” and “will never have another idea!” Then something sparks or I hear dialogue and I start writing. At a certain point, pretty early on, I figure out the tent poles of the story and then its all about structure and dialogue.

Where do you find the best material for building your characters? Are any characters in this play based on people that you know?

I suppose like most writers, I start with who and what I know. But, at certain point, a wonderful thing happens…the characters start speaking for themselves and you just write down what they say. I live for that moment!

Can you describe your development process at the Skylight theatre? Any unexpected surprises?

the Skylight Theatre has been a wonderful experience! I hope I get to do it again. There are not many theaters that take chances on new work, but that is Skylight’s mission. Gary Grossman and Tony Abatemarco are experienced, smart producers who want the best for the work and work tirelessly to bring about an excellent production. The whole team, from the staff to the technical people and designers are first rate. I felt very lucky to be premiering a play there.

Writers who have influenced your career the most?

Conor McPherson, Martin McDonagh, David Grieg, Alan Ayckbourn… and I reread Death of a Salesman once a year.

What are you working on next, and when can audiences expect to see it?

I am working on a play about a political family. The father is about to announce his run for the Senate when his daughter tells him her ex-boyfriend has posted a sex tape of them. When she goes to seek solace from an old friend she hasn’t seen in a long time, the girl tells her she was raped by the would be Senator. No magic in this story, but it’s a drama about difficult choices between family ties and personal integrity. It’s called Dignity. I haven’t finished it yet so I can’t tell you where it might land! In the meantime, I have a couple other plays floating around that I hope will find a home soon.