MARTY GOES TO HOLLWOOD is a documentary about a Scottish actor, Marty Docherty, who landed a role as Tom Hank’s brother in the feature film, ‘Cloud Atlas.” Unable to afford a trip to the Hollywood premier, his friends team up to help him raise the money and decide to make a documentary about the process. Arriving in California days before the screening, the lads learn that Warner Bros. will not allow Marty to walk the red carpet. In the face of adversity they set out to defy the big studio and crash the premier, finding tremendous support and forging a life-long friendship in the process.

The film will screen at the 2016 Marina Del Rey Film Festival on August 13 at 3pm.

HR: I guess we should go back to the beginning. How did you land the role in “Cloud Atlas?”

MD: I auditioned for the part of ‘Eddie Hoggins’ in Glasgow. I thought I was maybe at the wrong audition as all the guys there were much older than me and much bigger (though that isn’t hard as I stand 5 feet 7 inches).

I was off book for the casting and I thought it went really well. Two weeks later my agent called to say that they loved my tape and that Tom Tykwer and the Wachowski’s wanted to see me in London for a recall. I was pretty nervous but my thoughts were just keep doing what you’ve already done and you have a chance. The recall went very well and the part of Eddie Hoggins was mine. One week later it was confirmed that I was in a huge movie when they called to say that my costume fitting would be in Berlin!

HR: How was the idea for the documentary conceived?

MD: It came about when I returned back to Glasgow from filming. I met my very good friend, Ian Bustard for a pint at our favorite pub of the time, The Griffin Bar. Ian was asking me how the shoot had gone and I was regailing him with tales of Andy and Lana Wachowski, Tom Tykwer, Jim Broadbent and Hugo Weaving. It had been such an amazing time for me as “Cloud Atlas” was my first feature film and my first experience 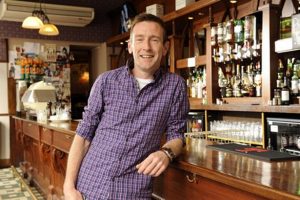 of something so large. Ian thought I was buzzing with the excitement of it all. He then said that I must go to the premiere in L.A. I of course said I’d love to go (and was sure I’d be invited) but there was no way I could afford it. He then said ‘why don’t we make a documentary about you raising the money to go?’ I thought that was a great idea, so Ian called Martyn Robertson, a friend, producer and film maker with his own company, Urbancroft Films. Martyn said it was the best idea he’d heard in seven years. So the concept of Marty Goes to Hollywood was born.

HR: What were your initial thoughts about actually going to Hollywood?

MD: It was a combination of nervousness and excitement. Having never been to the USA I was unsure of what to expect. I wanted to make sure that I make the best of any opportunities that came my way. Before we went we had no idea of what was going to happen so the feelings were more of excitement, of opportunity and possibility. The one thing I did know of L.A. was that there was a business there and thus opportunity. That’s the thing about being an actor… you just never know.

HR: Were you surprised when your home town got behind your plans to go to the premier?

MD: Yes, I was quite surprised at the support we got in Glasgow. The nature of people here is that of community, of wanting to help people if they can, of wanting to see one of they’re own doing well. I’m sure some people thought 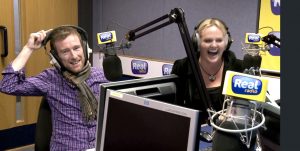 ‘who cares. It’s just some actor who wants to go to Hollywood.’  However the story started to get arms and legs and all of a sudden we were on the radio and in newspapers. Even the Lord Provost of Glasgow got involved, and we got good luck messages from Alex Salmond, Scotland first minister and the leader of the Scottish Labor Party. Glasgow is full of generous people and the bottom line is I wouldn’t have made it to Hollywood without them. Glasgow is by far the best city in the World – apart from L.A.

HR: How were you received by the British community once you arrived in L.A.?

MD: The reception we got from Brits in  L.A. was amazing. They seemed to take our story to heart and backed us all the way. We had been invited to meet them for breakfast at Cecconis, an amazing restaurant, on the Saturday morning and Tuesday morning. Craig Young and Eileen Lee, who run Brits in L.A. couldn’t do enough for us. Craig contacted his manager and arranged a meeting for me. By the time Tuesday  came round we needed help more than ever and I was absolutely bowled over with the support. Again, like so many people on this project, they helped when they didn’t need to. The best parts of human nature 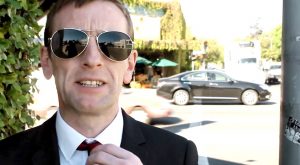 never ceases to amaze me.

HR: What was the biggest misconception you had about L.A?

MD: I guess I thought it would be smaller and was amazed at the scale of the city. I also thought everyone would be a hippy, doing hot yoga, but when I got there I loved it! What’s not to like? I thought it was a very healthy city full of very beautiful people. Our days were pretty busy it was hard to appreciate certain things. I was impressed by the Roosevelt hotel! What a place!

HR: Are you surprised at all the positive reaction “Marty Goes to Hollywood” has received?

MD: Very surprised. First off I was amazed at the finished product and the great job Ian, Martyn, Chris Kinghorn, the cameraman, Thom Clark, the editor and Scott Twynholm, our music composer did. It must have been hard for those guys finding the best 53 minutes out of over 100 hours of footage.

The bottom line is that people liked our story and what we were trying to accomplish. Nothing we did was set up. That gave an honesty to us and our journey that people 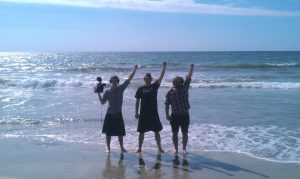 responded to. Our story also became a bit of ‘David vs Goliath,’ and who doesn’t want to root for the underdog? The support and goodwill that came our way seemed to shine through in the film and all the people I met from the business, actors, producers in the main, loved it and loved it for different reasons. The film covers a lot of topics about being an actor and life in general and if anything it’s a film about friendship. I think that’s why people have been so positive about it. This film has been an amazing journey. Memories and friendships forged forever. The most incredible part of an 18 year acting career .

HR: Did you ever dream the the documentary would air on the BBC?

MD: I never really thought the BBC would be interested in our film. I’m not sure they would have had we not been nominated for a Scottish BAFTA New Talent Award, then subsequently winning it. I saw three or four rough cuts of the movie before I actually saw the finished version. Each time it improved as is normal with the grading process, the music etc . The final cut is an excellent film, worthy of a BAFTA nomination, if I do say so myself. Still to get in on the BBC at Christmas was just the icing on the cake. The BAFTA and the TV screening was a testament and a small reward to all those who had contributed their expertise for very little money. 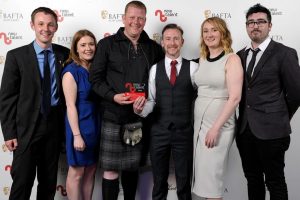 It was also a chance to bring the movie to a wider audience. All of which made me feel very proud and much taller than I actually am. My family and friends were particularly delighted as they had heard so much but hadn’t seen anything. In the week leading up to the TV screening the BBC advertised it about 10 times a day and we couldn’t believe it. A chat in a pub 3 years earlier had led to this?! If someone had said that to me 2 years earlier , I would have said they were a candidate for a lunatic asylum.

HR: Where did you watch it and what was that like?

MD: We went back to the Griffin bar were it had all began. Friends and family joined us. There were around 60 people there. What a buzz ! It was also a bit surreal as the TV announcer said ‘ Now on BBC2 , one man has a dream in ‘Marty Goes To Hollywood’. I thought, that’s me!!! It was like it wasn’t really happening. I looked around at a lot of those people who helped in some way and I was more interested in their reactions. People were laughing. Some were crying. I had a small moment to myself to reflect and thought how brilliant it was that we had a dream, we achieved it, we won a BAFTA 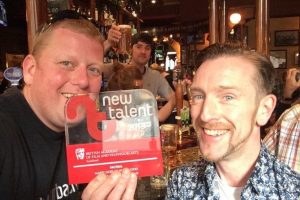 and now we were on the BBC. I felt humbled by it all. Dreams really can come true.

MD: That’s possible ! On the night of the screening I got in a taxi to go home. As I climbed in the taxi driver said, ‘Hi Marty how you’? I’d never met the man before in my life! He then said, ‘You were on the telly tonight, eh?’ Incredulously I said ‘Eh , that’s right aye ‘. I’d been on a radio program two weeks before to promote the documentary. The driver then said, ‘I really enjoyed you on the radio a couple of weeks ago’. I was pretty stunned. I guess taxi drivers know everything in Glasgow. My profile has definitely been raised by the documentary. A lot of times people pass me in street and say, ‘Awrite Marty’ (awrite is Glasgow slang for all right ). Other times people in a bar or a cafe will say, ‘ I know you. Where have we met before?’ The truth is we’ve never met but people recognize your face and think they know you. I quite enjoy it. Glasgow people are not backward at coming forward. They won’t be shy at telling you they know you. Certainly for a few months I’ve basked in the glory of my new found minor celebrity status.

HR: What are you working on now? 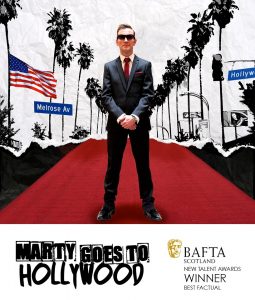 adaptation of Tam O ‘ Shanter, a very famous poem by Rabbie Burns with a visual arts company. I had my first day green screen filming last week. I’m very excited about it as they have a distributor in place on the strength of their  previous work. I’ve just finished playing a lawyer in 6 episodes of “River City,” the Scottish soap opera. I’m about to play a part in “Outlander” and I’m currently writing a one man show with the resident writer at the Citizens Theatre which we plan to put on in the Autumn. Exciting times!

HR: Any plans to come back to Hollywood?

MD: At the moment no. Not because I don’t want to. I would have loved to stayed on but the price of getting a work Visa there was just a bit much. However I would love to come back. I can see myself running down to muscle beach at 7am, going over my casting for that day in glorious sunshine. That’s in my dream of course, but as we’ve already proved, dreams really can come true.

HR: Thanks for chatting with us, Marty, and congratulations on all your success.

MARTY GOES TO HOLLYWOOD screens at: