Here are our movie recommendations for the weekend of May 17, 2014.

Yes, it may sound like another cheezy video game movie, but this Godzilla actually has heart.  The story is compelling, the action non stop. 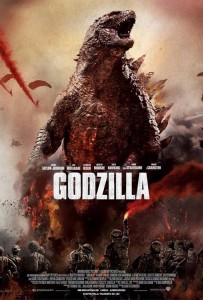 Don’t listen to the haters who tell you there is not enough of the G monster.  He is there when you need him, and he does save the world.  The cast in Godzilla is strong,  especially young Aaron Taylor-Johnson and veteran actor Bryan Cranston.  If you are looking for a fun ride with huge special effects, this is the one to see.

Writer, Thomas McCarthy has crafted a well written Disney film that touches the emotions and delivers a sweet, well told true story in the process.  Directed by Craig Gillespie and starring John Hamm as a down on his luck sports agent who comes up with the brilliant idea of recruiting Indian cricket players 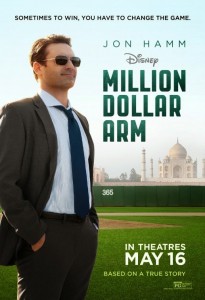 and grooming them to be baseball stars.  After holding a nation wide contest in India he returns to the US with two wet behind the ears kids who have barely been out of their village, let alone to L.A.  Will they ultimately deliver?  Check out this congenial film to find out.  Be prepared to laugh and maybe shed a few tears in the process.

From acclaimed director Pawel Pawlikowski comes this new Polish language film set in 1962 about a young apprentice nun (played by stunning newcomer Agata Trzebuchowska in her very first role), who is about to take her vows.  Before she does however, her Mother Superior insists that Ida visits her aunt Wanda, (Agata Kulesza) who lives in the city.  Ida soon learns that she is in fact Jewish and a holocaust survivor.  Ida and her aunt, a hard drinking, chain smoking judge who has sent people to the gallows, set out to find the grave-site of Ida’s 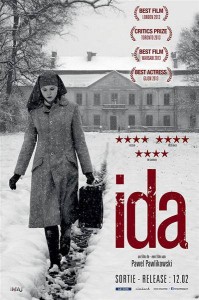 parents, and in the process discovers the truth as to how Ida’s parents died.  Ida experiences life and love, ultimately coming to terms with what she really wants out of life.  Not at all predictable, Ida is a beautifully made film about a deep and disturbing subject.  It has some of the most visual and compelling black & white images from cinematographers Ryszard Lenczewsi and Lukasz Zalwe have seen on film in recent times.  Hopefully the Academy will remember this one come award season.