A driver attempting to evade a drunk driving stop sped past a barricade on Red River Street and plowed into dozens of SXSW revelers, killing two and injuring 23 in a horrific scene here early Thursday morning, police said.

Red River Street is home to many popular clubs hosting South by Southwest music showcases, had been 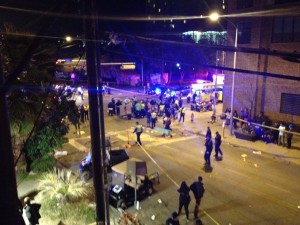 closed to motorists and was crowded with music fans waiting to get into the Mohawk nightclub.11:50 a.m.

Police Chief Art Acevedo said the man, identified by the American-Statesman (www.statesman.com) as Rashad Charjuan Owens, 21, of Killeen, will face two charges of capital murder and 23 counts of aggravated assault.

Police also clarified who was killed in the incident.

One of the dead, a man from the Netherlands, was riding a bicycle near the intersection of 11th and Red River streets when struck. The other, an Austin woman on a moped, also was killed. Both were pronounced dead at the scene, officials said.

Another man on the moped is in stable condition, Acevedo said.