MICHAEL SHAW FISHER’S musical prequel to Hamlet, SKULLDUGGERY, currently playing at the Sacred Fools Theater in Hollywood, is an emancipation of one of history’s most epic stories. Fisher takes Shakespeare’s greatest play and extracts the core, bringing the characters to life in a most vibrant and colorful way. In particular, Fisher shines a light on Claudius, Hamlet’s uncle and the villain of the original story, showing us his human perspective. 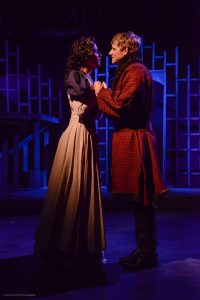 years before the birth of young Hamlet. Claudius is a meek and poetic teenager when he and his brother, the imposing Hamlet Senior, meet Gertrude for the first time. Emotions run high among the three youngsters and an attraction between Claudius and Gertrude is apparent. With the kingdom is on the brink of war swift choices must be made. Claudius’ sickly demeanor makes him more of a battlefield liability than a viability and he is soon left behind while Hamlet and their father, known only as “The King,” leave for war. Seven years later Hamlet Senior returns to Elsinore and takes Gertrude as his bride, leaving his brother nursing a broken heart.

Time passes. Chaos ensues and the country is forced to reconcile with the new, warmongering king.

While this may sound dark and gloomy, Skullduggery is also a light-hearted musical romp with songs such as “Never Trust A Ghost,” “Girl Talk” 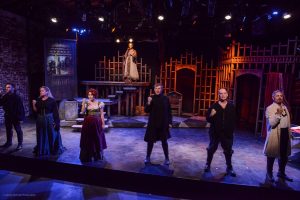 and “Snake In The Garden.” The play attempts to reveal answers missing from the original Hamlet. What really happened to Yorkick? What fate befell Ophelia and Laertes’ mother. The skeletons in Shakespeare’s masterpiece all come come out to play and ultimately, Claudius is faced with his most difficult decision. To kill or not to kill?

JOHN BOBEK as Claudius convincingly transforms from a poetic teen, filled with puppy love, to a murderous villain and the nemesis of Shakespeare’s classic play. DAVID HAVERTY creates an ominous force as Hamlet Senior, while LEIGH WULFF’S brilliant and melodic Gertrude brings them together and helps to reveal the humanity in the villain. 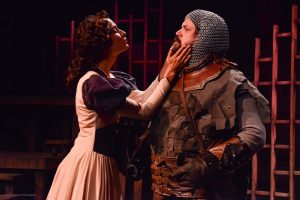 LARSEN as Berta, bring a lighthearted, comedic essence to the production.

The Scenic Design by DEANNE MILLAIS and the costumes by LINDA MUGGERIDGE bring character and a sense of reality to the incredible story.

Fisher’s intelligent play, (he wrote the script and the music), SCOTT LEGGETT’S sure handed direction, NATASHA NORMAN’S fluid choreography and MICHAEL TEOLI’S impressive musical direction, (leading a tight 10 piece band), make Skulduggery a not to be missed theatrical event. It’s a Broadway worthy production right here in our own backyard.

WHEN: Fridays and Saturdays at 8pm, Sunday Matinees at 3pm. Ending November 5.