Academy Awards telecast producers, Craig Zadan and Neil Meron announced today that “Ted” director and “Family Guy” creator Seth MacFarlane, better known for his work behind the camera than in front of it, will 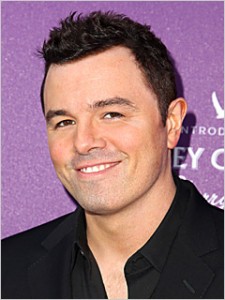 MacFarlane, 38, injects youthful energy into a ceremony that has struggled to appeal to a younger audience. MacFarlane’s show, “Family Guy,” has a young following, as did his summer hit, “Ted,” which paired Mark Wahlberg with a grown-up teddy bear voiced by MacFarlane. The film has earned $420 million worldwide.

“We are thrilled to have Seth MacFarlane host the Oscars. His performing skills blend perfectly with our ideas for making the show entertaining and fresh,” said Zadan and Meron. “He will be the consummate host, and we are so happy to be working with him.”

The 85th Academy Awards will be broadcast live on Sunday, Feb. 24, on the ABC Television Network.