October, 2012 will mark the 50th anniversary of the release of The Beatles’ first single, Love Me Do, that launched the Fab Four’s stellar career. Nearly five decades later, The Beatles are still captivating audiences everywhere and are considered the most influential musicians of all time, according to Rolling Stone.  Along with their 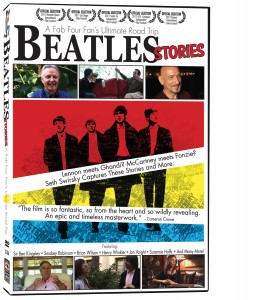 musical legacy, The Beatles left behind personal stories with those lucky people who were able to share a moment with these legends.

On October 2, 2012, to mark the anniversary, Cinema Libre Studio is releasing BEATLES STORIES, a documentary that captures cherished stories from famous fans – and the not so famous – about their unique encounters with these often imitated, but never duplicated, international stars.  To coincide with the DVD/digital release date, the film will make its official theatrical premiere on Tuesday, October 2nd at the Egyptian Theatre in Los Angeles, with future showings to be announced.

Director/ Producer Seth Swirsky, an accomplished singer-songwriter and best selling author, grew up in the 60s and fell in love with The Beatles.  They greatly influenced his decision to pursue a career in music where he is known for writing the international #1 hit Tell it to My Heart by Taylor Dayne and Love is a Beautiful Thing by Al Green.

In 2004, Swirsky was invited to perform at The Cavern Club, which the Beatles made famous so many years ago.  While in Liverpool,

Swirsky began asking the locals about The Beatles. To his surprise, these strangers shared their fondest recollections about the band; treasured stories he had never heard before, which he captured on his hand held video camera.  Swirsky then wondered, “How many more stories are out there that people have never heard before?”  That was the moment that BEATLES STORIES was born!

Over a period of eight years, Swirsky traveled around the world filming an exceptional array of people – many themselves celebrities – who wanted to share their stories.  Some of the stars he managed to sit down with include Sir Ben Kingsley, Smokey Robinson, Brian Wilson, Henry Winkler, Jon Voight, Art Garfunkel, Davy Jones and Graham Nash.