One of the best but unfortunately under-promoted films of 2012 is David Chase’s coming-of-age, 1960s music drama, “Not Fade Away.”  An honest, heart-felt look at a young man’s journey through those turbulent times, the film should 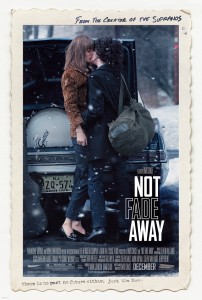 be on many end of year short lists, but with a cast of mostly unknown actors, it seems that distributor, Paramount Pictures, has written off this little gem.

David Chase is best known as the creator of “The Sopranos” and he poured his heart into this partially autobiographical tale.   With a brilliant soundtrack by bands such as the Rolling Stones and the Beatles, and a star turns by young actor, John Magaro as David Chase’s alter ego, “Not Fade Away” is a film not to be missed.

See the film at the Hollywood Arclight, Sunset and Vine.