Sacha Baron Cohen’s new film about a gay Austrian model’s adventures through America is a follow up to his Borat movie from a few years ago. Word has it that it is loaded 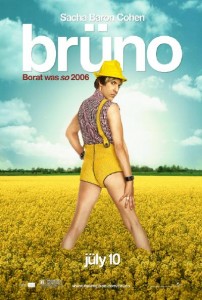 The Motion Picture Association of America originally gave the film the dreaded NC-17 rating forcing the filmmakers to cut scenes and make Bruno more palatable for the masses.

After seeing the latest cut, the ratings board reversed it’s decision and gave Bruno an R for “pervasive strong and crude sexual content, graphic nudity and language.”

Meanwhile the poster for the movie has recently been released, and you can catch the trailer at:  http://www.thebrunomovie.com