He’s tall, intelligent and holds himself with the dignity and confidence of a third generation Ranchero.   Vicente Fox, is the former president of Mexico (2000-2006), is proud to be a Mexican, and proud to be an American, a name he believes applies 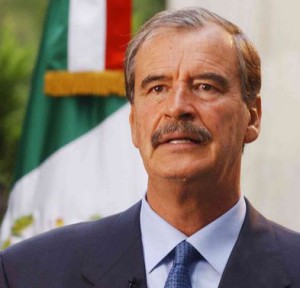 to all those who live in the lands named after Amerigo Vespucci, the Italian explorer who said that the lands to the west were a separate continent.

President Fox, speaking at the Milken institute in Los Angeles in April of this year, echoed age-old British concerns over national identity and collective achievement –the United Kingdom being a unitary state consisting of four countries: England, Northern Ireland, Scotland and Wales.  “If the United States and Mexico combined (their countries) they would be the second largest economy in the world,” Fox explained.

The Mexican economy is healthy even during this time of global turmoil, President Fox told his audience, who included former California Governor Grey Davis.   Fox attributes the health of the Mexican economy to the Mexican people themselves.   “I am proud of every Mexican, including those here in this country, documented or undocumented,” he said.   His eyes reflecting sincerity with the gleam of a proud madre.

Fox went on to explain that it was migrants, in multiple waves of immigration, which has made America great.  “We should be building bridges not walls!  We from abroad sense fear in this nation, since 911.”  Fear is not the foundation of a great nation according to Fox, “This nation needs to return to basics, [to] go back to the dream of the founding fathers.”

In early 2001 Fox’s mother had been proud and delighted to welcome President George W. Bush to that same ranch started by her grandfather.  During their meetings Fox and Bush had agreed on trade relations and emigration reform.   After the talk they walked around the ranch.   “No horses!” Fox declared, with some amusement.   “Bush looked like a cowboy, but he can’t ride!   But he was wearing his cowboy boots.”

“You gain respect by love,” Fox explained.  “Others do it by fear!” hinting at Bush and his administration.  “The lesson I get is that if you go into a war you [had] better know what you are doing and win the war quickly.”  Fox said that one of his inspirations was St. Ignatius Loyola.  “I decided to be President of Mexico before anyone knew this about me,” he [said]. “’Heroic aspirations move you to action,’ as St. Ignatius said.”

Alan von Kalckreuth is a Filmmaker and a journalist.