A moral imperative is a strongly-felt principle that compels a person to act. It is when something must happen because it’s the right thing to do.

Using this definition it might have been correct to eliminate Adolph Hitler before he ignited World War II. Or to have disposed of Charlie Manson before he and his minions went on their murderous rampage. While I suspect moral imperatives are seldom murder related, SAMUEL WARREN JOSEPH’S riveting new play, MORAL IMPERATIVE, tackles a dilemma that does ultimately lead to someone’s demise. 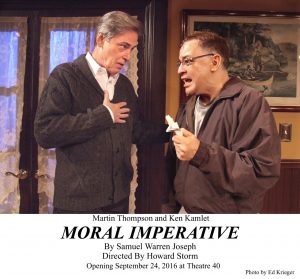 story concerns “Seth” (MARTIN THOMPSON) a self righteous professor and Provost who has waited patiently to be appointed president of Briarton University, his Alma Mater. Seth’s world is shattered when his most hated rival, Oscar (DAVID HUNT STAFFORD) is unexpectedly bestowed that prestigious position.

When Oscar’s modus operandi becomes clear it drives Seth to the edge of desperation. Oscar, we discover, intends to eliminate tenure for the professorial staff, start a school hockey team, and perhaps most offensive, start a hotel management school.

Already disgusted with the dumbing down of America, Seth seethes with anger as he commiserates with his close friend and colleague, “Robert” (KEN KAMLET). As they discuss various options, German philosopher, Immanuel Kant’s name is mentioned and Seth suggests that perhaps it is their moral imperative to wipe Oscar from the face of the earth. It takes some convincing but a plot is hatched and eventually executed, but not without complications.

Seth finally realizes his dream and becomes University president, delivering a touching eulogy at Oscar’s funeral. His partner in crime however slowly begins to unravel.

Soon a Colombo like detective, (BRANDEE STEGER) pits Robert and Seth against each other in order to confirm her suspicions that Oscar didn’t die of natural causes. Here the play takes some brilliant Hitchcockian turns as it spirals toward it’s poignant conclusion. 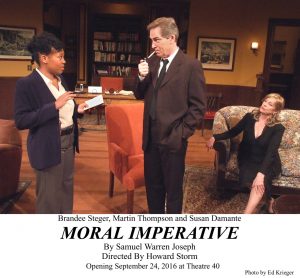 expertly guides his talented cast through this twisted thriller. One and all deliver stellar performances.

Martin Thompson as “Seth” capably hides his desperation as a pompous man with little left to lose. SUSAN DAMANTE as his wife, “Mary” is powerful as a woman who recognizes the truth but tries to ignore it for as long as possible. Ken Kamlet as the volatile Robert is compelling. It is painful to watch him unravel and crumble.

The set design by JEFF G RACK is detailed and exceptional. At times I felt like I was watching a wide screen movie.

If you’re fan of intelligent theater, Moral Imperative is the play to see.

WHERE: Theatre 40, in the Reuben Cordova Theatre, 241 S. Moreno Dr., Beverly Hills, CA 90212. The venue is on the campus of Beverly Hills High School and there is free parking.