Who cares if the story line of the SIAMESE SEX SHOW by JOHN PAPAGEORGE, now playing at the Lounge Theatre on Santa Monica Blvd in Hollywood make little sense. It’s a light-hearted romp with great costumes and talented singers and dancers performing radio worthy pop tunes that are going to entertain and have you leaving the theater with a smile on your face. 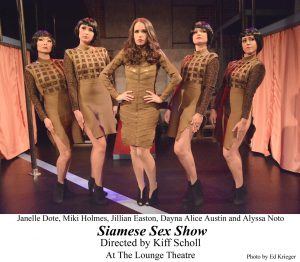 to know what the show is about?

Let me try and explain it if I can.

We’re in the future. A mysterious military, industrial, entertainment complex called Monocorp has fabricated a global epidemic claiming that sex will lead to certain death. By controlling our most basic human need Monocorp stands to profit. Why you ask? Because they have created a “safe” sex product called the Love Light that is guaranteed to increase their power and wealth. Or something.

This somehow brings the world to the brink of an apocalypse and it will now take four fallen pop stars to overcome their pop star differences and band together in order to stop Monocorp’s evil agenda.

Are you following me?

If not it really doesn’t matter, because here’s 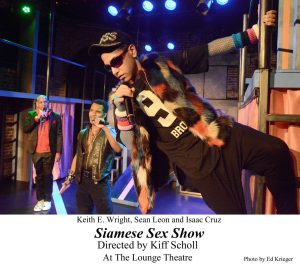 the thing. The Siamese Sex Show is a hoot. Director, KIFF SCHOLL, calls it “a living comic book that satirizes pop music, technology, and of course sex,” and while the story line may be a yawn to some, the show is a joy ride with cutting edge music and some stand out performances.

The entire cast gives it their all. Some are worthy of special mention.

ERIN RYE is hilarious as a sex robot with a “Doctor Evil” like tic, placing her little finger in the corner of her mouth 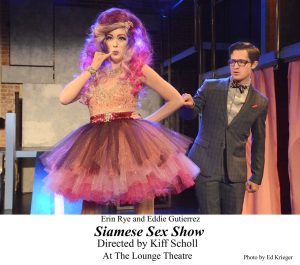 before speaking. Her joyful exuberance in this role is contagious.

RICCARDO BERDINI is at ease as “Mr. Hadji,” an Italian magician who also happens to be a great singer, while JILLIAN EASTON is an alluring love interest.

JANELLE DOTTE, MIKI HOLMES, ALYSSA NOTO and DAYNA ALICE AUSTIN, the four beautiful ladies the play calls “The Board” are excellent in their song and dance routines.

Check out the music for the Siamese Sex Show here: http://www.siamesesexshow.com/music1.html