Marty Elcan is a Hollywood-based Director with over 25 years of production experience, who has worked on numerous movies and television shows.  She’s always been fascinated by American Sign Language, which led her to her latest project “Shut Up and Sign.”  We caught up with Marty recently and asked her about this new venture.

Hollywood Revealed: Tell us how you got involved in Sign Language?

Marty Elcan: I was in the International singing group “Up With People” right after high school and a small group of us went to a deaf school to entertain the kids. I’m not quite sure about the logic of a singing group going to a deaf school, but the kids were so radiant and enthusiastic about us being there, and they 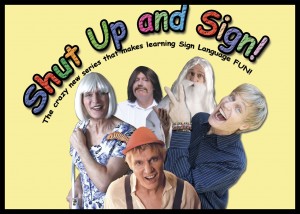 taught us some of their songs in Sign Language. I was hooked. I studied it for a brief time many, many years ago, and then got too busy to continue it when I started working in the film industry.

Marty Elcan: I had the opportunity to work with actress Marlee Matlin on two different projects and though she was so appreciative of my efforts to communicate with her directly instead of an interpreter, I realized how rusty I was. A couple of years ago, I was “between assignments” as we say, and I decided to take a brush up class. That turned out to be a career-expanding decision!

Marty Elcan:When I first entered Bob Hiltermann’s ASL (American Sign Language) class, I wondered if I had walked into an improv performance. The students were laughing out loud at the teacher’s antics, and were so fascinated by this crazy animated teacher that they all enthusiastically echoed

the signs he was teaching. A natural comedian, he made learning fun.At the beginning of some of the classes, Bob occasionally played 30-minute clips of several different Sign Language series currently on the market. Compared to Bob’s teaching style, these were deadly stodgy and boring, and almost unwatchable, so a light bulb went off. I talked to Bob about collaborating on a new Sign Language series that could incorporate his entertaining style, and he was immediately on board.

HR: Had Bob ever done anything like this before?

Marty Elcan: Well, as it turned out, besides being a teacher, Bob’s also an actor. I guess I shouldn’t have been surprised. He played Orin in the movie “Children of a Lesser God,” then he did another project with Marlee Matlin — the Hallmark movie “Bridge to Silence.” From there, he had a recurring role for a year on “All My Children,” a guest-starring stint on “Cold Cases,” a role in “The Hammer,” and he is one of four stars in the much acclaimed documentary “See What I’m Saying.” He’s also the drummer for the world’s only all-deaf band “Beethoven’s Nightmare” which is now well-known around the world, and he’s currently performing in the Deaf West Theater production of “Cyrano.”

HR: So how did this acting background help with Sign Language?

Marty Elcan: We set out to make learning Sign Language FUN, and with Bob, no idea was too zany to explore. We wanted a series that would teach with humor. He teaches the signs in a clear way, but we also developed a wide array of characters doing skits to reinforce the lessons, and all of those characters are played by Bob. Somewhere along the way, we decided to do a song in Sign Language for each of the dvd “episodes” and those have turned into full music video productions. In one of them, Bob plays nine characters, all floating on clouds.

HR: It’s one thing to get the idea for something like this, but another to get it made. How did you know how to do that?

Marty Elcan: I’ve worked in the Film and Television production for over 25 years. As an Assistant Director, I worked with Elizabeth Taylor, Sid Caesar, Milton Berle, Shirley MacLaine, Julia Roberts, Kevin Costner, Brad Pitt, Walter Matthau, Carol Burnett… on shows such as “Steel Magnolias,” “Driving Miss Daisy,” “Mystic Pizza,” “Amazing Stories,” “Six Feet Under, “Inherit the Wind” (with George C. Scott and Jack Lemmon).  I’ve had the good fortune to work with and learn from such directors as Steven Spielberg, Martin Scorsese, Bruce Beresford, Dan Petrie and Clint Eastwood. Several years ago, I started directing, and with 4 award-winning shorts and a mixture of other projects under my belt, I got to direct my first feature film “Next of Kin.”

HR: And Bob? What’s his background?

Marty Elcan: Wow. Interesting story!  He grew up in Germany. He was the tenth child of eleven. Bob was born hearing, but he had only recently discovered that he became deaf at the age of four when he had spinal meningitis. Shortly thereafter, when he was six, his family moved to Canada. Between moving to a new country and adjusting to a different life, and eleven children to care for, Bob’s parents didn’t realize Bob was deaf!!! They just thought he was “slow.” Keep in mind that not only couldn’t he hear, but everyone was now talking in a new language he didn’t know. His family just assumed he had learning disabilities. Bob wondered so himself, because he could see others communicate so easily, and it was so hard for him. It wasn’t until he was ten years old that a hearing test showed he was deaf. But by now, his family had grown accustomed to treating him as if he were mentally challenged. Knowing how smart he is, I can only imagine how frustrating this time was for him. He says his memories from the ages of ten to seventeen are far from happy.  When he was 17, a counselor suggested he go to Gallaudet University in Washington D.C. There, he was first introduced to Sign Language and it changed his life. I think that’s why it’s so important to him now to share the joy of Sign Language with others.

HR: Is this series for children only?

Marty Elcan: No, not at all. The series is for anyone “from age 8 to 108.” We heard about a nine-year old addicted to video-games who watched the series and now he goes for days without talking – only signing. He’s trying to get Sign Language taught at his school! Then another customer in his sixties told us he owns every Sign Language series out there and this is the only one that clicked – he says it’s the best and most entertaining series on the market. By the way, for anyone who already knows basic Signs, we also have three “Reading Fingerspelling” practice DVDs (Beginning, Intermediate and Advanced) that are each about an hour of finger-spelled words and great reading practice.

HR: So how can someone get the DVDs?