In the recently released motion picture “16-Love,” actor Mark Elias manages to do a lot with little. The film’s plot-line deals with “Ally Mash” played by Lindsay Black, a young, female tennis pro, who after an ankle injury, meets up with and begins to motivate “Farrell Gambles” (Chandler Massey), a handsome up-and-coming tennis player who wants badly

to be a contender. In the process, the couple manage to fall in love and wouldn’t you know it, by the end of the last reel, Ally is fully healed and manages to win her big match against Russian arch-rival “Katrina Apranova,” well played both on the tennis court and on screen by Susie Abromeit.

While the picture, (rated PG) doesn’t claim to break any new ground or reveal much about teen angst we haven’t already seen in, oh, probably a hundred other movies, “16-Love” is an enjoyable, lighthearted film that is perfect for family viewing.

While the leads handle their roles with charm and professionalism, it is journeyman actor, Elias that 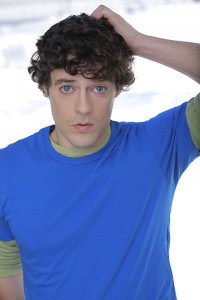 manages to grab your attention in his supporting role. His natural unaffected performance got a number of the bigger laughs at the recent L.A. screening at USC. We managed to talk to Elias afterwards and questioned him about his life and career.

HR: You had a strong screen presence in “16-Love.” Funny and natural. Any of your good scenes end up on the cutting room floor?

ME: Actually, yeah I was pretty bummed to see one scene in particular didn’t make the final cut. Chandler (Massey), Steven (Christopher Parker) and I are playing Wii Tennis together and just having a great time. We shot it on the first day of filming and it really helped show our friendship, our bonding. But hey that’s filmmaking. Maybe it’ll make the DVD extras.

HR: Talking of cutting room, you starred in a film of the same name shortly after arriving in Los Angeles. Tell us about how that happened?

ME: I was hired by the director after he saw a short film I did with a mutual friend. He thought I was right for the part and that was pretty much it.

HR: Were you shocked to be offered the lead? Did his investors want a name in the role, like most money people do?

ME: Luckily he and the investors decided to go with me and I think it showed, although there were definite names being thrown around for the role. When I got the call it was a Friday night and I was elated all weekend and then some.

HR: What did you learn on that film, and how did it help your career? 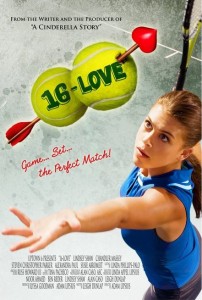 ME: The audition was a lot of improv and British accents for the tennis announcing scene. It was a fun audition and we given the ability to have fun and create. I was happy it worked out.

HR: How many call backs?

ME: I think I booked it straight from the first audition.

HR: How much of your stuff in the film is ad-libbed, if any, or did you guys stick to the script?

ME: We tried sticking to the script but a lot of the stuff that ended up working was when we improved and got up off the page. Leigh Dunlap, the writer gave us really cool characters to play with so I just took that and ran with it. Developed some aspects of Nate’s personality, like his geek pop culture love.

HR: Where are you from and how long have you been an actor?

ME: I was born in Houston and raised in Philadelphia. So I’m basically a Philly boy. Which generally means trouble! And I’ve been an actor since the first time I tried to get out of trouble.

HR: When did you realize you would have to make the move to L.A?

ME: I quickly realized that being in LA was the right place to be to take an acting career seriously. I can’t put a finger on the exact date but it was very much a feeling of “I’m going to do this.” And began to take it seriously.

HR: What’s the first thing you did when you got here?

ME: The first thing that propelled my career in L.A. was signing up for classes at the Beverly Hills Playhouse. That was the “I’m doing this one hundred percent” moment.

HW: What did your family think when you told them that acting was going to be your chosen career path?

ME: Next question? Ha. I remember it wasn’t an overwhelming feeling of agreement but I knew if I was going to do it, I needed to do it right and do it then, and rely on my family’s “hard work breeds success” attitude.

HR: What are the bigger challenges you face as you try to further your career in Hollywood?

ME: I think a huge step is making it to the next level but in a more specific terms I want to get films made that I’m creating, not just acting in.

HR: So are you planning to write and direct?

ME: It’s something that I’d like to do when the time is right, directing. Writing is quickly becoming an enjoyment that I’m trying to keep as a fun outlet and not “work.” I don’t want to end up caught in chasing the next hot idea and get lost in that tunnel.

HR: You directed a short film called “The Juggler” that had some famous faces in it. Can you tell us about it?

ME: It really started out as a fun exercise and all of a sudden friends of mine were getting excited about it and a lot of them were in between gigs and it just worked out really well. Josh Sussman, Penn Badgeley, Shawn Pyfrom, Aviva, they were all willing and excited to be a part of it. The story itself was sort of a nod to the Chaplin era films, a lead character with no dialogue, an every day guy, based around his girlfriend’s high school party.

HR: Who’s been your biggest influences?

ME: I think as a kid, the actor that amazed me the most was Dustin Hoffman. I saw “Rain Man,” “The Graduate,” “Little Big Man,” and “Midnight Cowboy” in the span of about two days. Also Robert Downey Jr,’s screen presence and unpredictability are great qualities I always try to be aware of. He’s just got his own style of doing things. I’m also a huge fan of Charlie Chaplin.

HR: What are some of the other films audiences might have seen you in?

ME: I was in a little horror film called “Animals” directed by Doug Aarniokoski, and I also have a few other feature projects in post right now. One is called “From the Head” and another called “Favor.”

HR: And on television?

ME: I had a great little part on Justified which is a show with a lot of buzz. I also was recently on The Event and Criminal Minds.

HR: What’s been your favorite role to date and why? On stage or on film.

ME: Most recently, I really enjoyed playing Nate in “16-Love” because it was a great, great feeling to be funny and make the background actors laugh by just doing improv. It was immediate feedback of what worked and what didn’t!

HR: What recent film do you wish you had been a part of?

ME: “The Artist.” I am in love with silent films.

HR: What’s the worst thing about being an actor in Hollywood?

ME: The eyes that roll when you say you’re an actor. Gotta love the cynics.

HR: And the best?

ME: Just being creative and expressive.

HR: What’s your main focus in the coming months?

ME: My feature “Beachwood Drive” that I actually wrote and hope to have shot by this summer.

HR: Thanks for talking to us, Mark.