‘Oh what a day, what a lovely day’

Feel the rumbling underneath of your feet from the roar of the engines. Feel that exhaust explode with power. See the roads race by as bodies are thrown through the skies. Your heart is pounding. Your ears are buzzing. Your eyes are wide and your jaw is dropped. You my friend have entered the world of Mad Max Fury Road. Welcome. 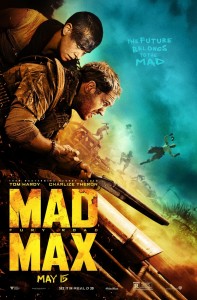 a dystopian future. It stars Tom Hardy in the title role (originally played by Mel Gibson), Charlize Theron as “Imperator Furiosa,” and Nicholas Hoult as “Nux.”

As the story goes, Max finds himself captured by tyrannical cult leader “Immortan Joe,” (played by Hugh Keays-Bryne) “War Boys” and taken to the Citadel. There, Max is used as a universal blood donor and his first recipient is War Boy Nux (Hoult). Meanwhile, Immortan Joe rallies his War Boys and Furiosa (Theron) as she takes the wheel of a “War Rig” (AKA big and bad ass muthafuckin heavily-armoured truck with A LOT of horse power).

As the group heads to Gas Town, Furiosa purposely drives off route into the Wasteland. Only to reveal that she took Immortan Joe’s five prize breeders and are on their way to a place far away from the tyrant. And so the chase begins. Nux joins pursuit with Max strapped to the hood of his car pumping his high octane blood into Nux’s dying body. If you think that is nuts, sit back, it’s only the first 15 minutes of the film.

Before we get into the selling point of the film, which is the action, let’s talk about the plot. It’s thin but in a good way. The Mad Max films haven’t been known to have really deep driven dialogues but what is said is indeed memorable and can some ways, actually have a point. That 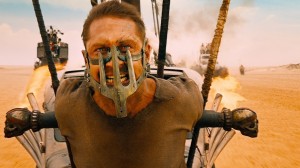 being said, I will bring up the underlying message this movie that some people have claimed it’s making, feminism. No need to sugar coat it, we are adults after all.  There is indeed somewhat of a feminist statement made but not in the “hairy armpit feminazi” manner people seem to picture. The statement that Furiosa, Toast the Knowing, The Splendid Angharad, Capable, The Dag and Cheedo the Fragile (those are the breeders) is that they are not property. Some critics have gone far as to say it’s much more than that but that may be because this is not Max’s story, it’s Furiosa’s.   Max just happens to be dropped into the situation.

Hardy does a great job as Max but Theron’s Furiosa easily steals the show. Her character is an amazing bad ass that I would go as to say (and I’m sure I’m the first to mention this) that she belongs up there with the great action heroines 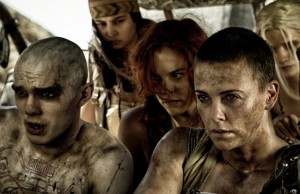 such as Sarah Connor, Ellen Ripley and Foxy Brown. There’s even a scene where Furiosa goes toe to toe with Max and is able to hold her own.

Nuts doesn’t even begin to describe the action set pieces this film does. What makes these action scenes stand on top of all the other action films in the past decade is that most of it is practical. Now I say most because the portion that is CGI are some of the bodies being thrown around and an amazing scene where a sand storm is in play.

Speaking of sand storm, that scene played from the trailer is the only big action set piece. But don’t, worry it continues to go even crazier.  One particular action scene that I admire the most was set through a canyon as Max and Furiosa battle a gang of bikers. As the music ramps up, Max hands Furiosa a weapon, which he was keeping her away from. When that happens, no words are exchanged, only a look. A silent agreement, an understanding between the two, that their need for each other to survive is evident. And so the dance begins.

Max picks off one biker here (BAM!). Furiosa picks off another 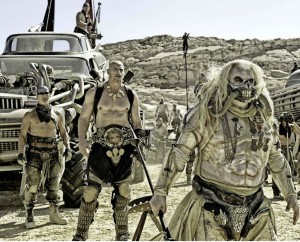 one there (BOOM!). The sequence for defense is laid out and it is seamlessly beautiful. I didn’t think it was possible to have a second viewing of the same film and still keep my heart racing as it did the first time.

I can usually pick out “the bad” from a film. Plot holes, horrible scenes, atrocious acting with god awful dialogue that makes you want to pull your teeth out, but I’m really finding it hard with this film. And I’ve seen the movie twice in theaters plus six times in my head.

So if you want some adrenaline in your diet with a side of pulse pounding action to wet your car crash whistle, this is the film for you my friend. I like to think that George Miller took a step outside of the G and PG rated movie building, saw the state of car action films these days and said, “Alright boys, let me show you how it’s done.” It took him 30 years to get this bad boy off ground; I only hope that it doesn’t take nearly as long for the next one. Because Mr. Miller, the world is going mad and we need more Max in it.