Half way through the play “You Make Me Physically Ill: Season 01, Episode 2: Love Never Dies” the character of “Jo” (Faith Hall) walks on stage and asks, “what the fuck is going on here?”  And that’s exactly what you will be wondering as you watch this tight little one hour of insanity and sexual perversion unfold at the Elephant Theater in Los Angeles. 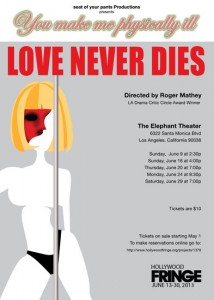 Okay, if you really need to know, the story goes something like this. John, the demented head of a family of misfits has invested his life savings to put on a show starring himself and his lusty daughters Jennifer, Jaclyn, and Sally. Unable to afford an actual theater John manages to book time in a local strip club where he stages his musical, a ripped off work based on Andrew Lloyd Weber’s “Love Never Dies.”  Jennifer’s boyfriend, Will and his buddy, Eddie, try to stop the show but are foiled by the handsome “perfect man,” Jason.

Written by award winning theater director, Roger Mathey, who just scored a home run with his recently closed revival “Trainspotting” at the same venue, “Love Never Dies” is a jaw droppingly hilarious, politically incorrect piece of absurd entertainment that will make you cringe 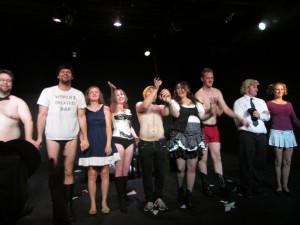 as you laugh your ass off.

As with the first “episode” of “You Make Me Physically Ill,” Mathey again manages to push the envelope, this time perhaps even further.  Episode 2 is soft-core theater through and through.  If this were a real TV show ratings would be through the roof.

The able cast consisting of Katie Aquino, Amanda Rae Castruita, Joshua Hensley, Michael Lutheran, Travis McHenry, Emily Claire Tisler, Karl Wade, Faith Hall, Heidi Kendrick and Jacob Wolber dive right in and play along with the madness, all of them committed to the high jinx in this fast paced comedy.  Even the audience gets in the act by being invited to throw play money at the young ladies as they work the pole in the strip club scenes. Take that as you will.

The show is a part of the Hollywood Fringe Festival.

For reservations go to: http://www.hollywoodfringe.org/projects/1379