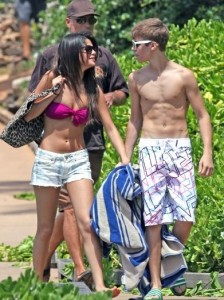 at the Billboard Awards in Las Vegas on May 22nd, 2011, Canadian pop idol Justin Bieber jetted off to Hawaii with girlfriend Selena Gomez.

Stripped to the waist, the young star showed off his rock-hard stomach in a pair of bathing shorts teamed with flip flops and 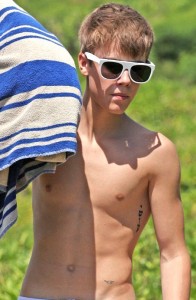 white sunglasses. He was sporting several never seen tats including one on his side written in Hebrew.

The pair were seen earlier holding hands at the airport in Maui.

Bieber and Gomez, 18, went public with their relationship at the Billboard award show, sharing kisses and hugs in the audience.