Lazy filmmaker, Todd Phillips has lifted beat for beat the plot of his original hit movie, “The Hangover.” This blatant attempt to cash in on the success of the first film finds the “Wolfpack,” Phil (Bradley Cooper), Stu (Ed Helms) and Alan (Zach Galifianakis) in Bangkok, Thailand. Rather than re-hash the storyline for you, just know that it is exactly like the 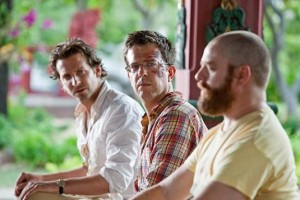 first one, except not funny. The actors barely seem to be going through their paces and the whole thing feels like a raunchy episode of of some cheezy 70’s sitcom complete with a pudgy guest star, Paul Giomatti as “Kingsley.”.

What was shocking and hilarious in the first film is jammed down our throats in “Hangover Part II.” Case in point is the storyline with “Mr. Chow,” an obnoxious, loudmouthed gangster from the previous film whose shrill persona was far more effective in small doses. Out of place and looking lost is Mason Lee playing a 16-year-old pre-med student, “Teddy,” whose disappearance is the plot point that was meant to drive this soulless, disappointing caper. Perhaps this film needed more than it’s eleven producers to insist that the filmmakers come up with something original. Or maybe just making a lot of money and providing more mindless entertainment this coming weekend was all that really mattered.