The story of disenfranchised youth living in suburbia who must choose between following their dreams or accepting a life of mediocrity is a passionate, 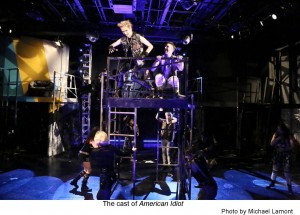 bawdy and a highly octane charged two hours of theater that has already enjoyed a healthy run on Broadway, with a Tony nomination for Best Musical and a GrammyAward for Best Musical show album. Beyond it’s Broadway run “American Idiot” has seen two national tours criss-cross the United States and beyond. 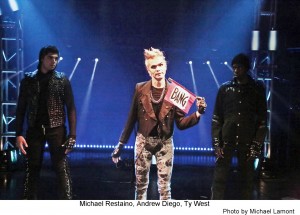 powerful, driving back-beat for the show.

This production certainly raises the bar for musical theater in L.A.  The vocals in “American Idiot” are spot on, the dance numbers impressive, particularly considering the size of the venue.  An enthusiastic cast delivers heart felt performances that certainly touched the sold-out audience at the Met Theatre last Saturday night.

That’s not to say the show wasn’t without some minor problems.  A couple of missed lighting cues and a microphone that was cutting in an out were just a few of the minor glitches, but they were ones that are easy to forgive.  That’s because this musical speaks to it’s audience with haunting melodies that are hard to erase from your mind.  I swear I was singing 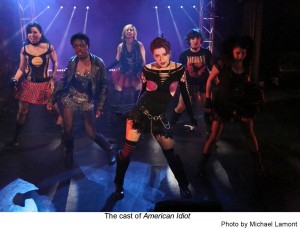 “21 Guns,” one of the many stand out numbers, in my dreams after seeing the show.

Jess Ford, Chris Kerrigan and Wesley Moran are convincing as the three leads who end up on separate life paths.  Ford in particular gave it his all, a large portion of the play resting squarely on his shoulders.  Other cast stand-outs include Andrew Diego as the campy St. Jimmy, Jackee Bianchi as Heather and Renee Cohen  as Whatsername; 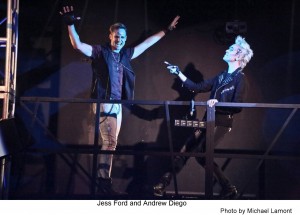 Feliciano whose beautiful voice and perfect harmonies were a treat to listen to.

DOMA’s production of “American Idiot” does this show justice.  Slick, well paced and poignant, this is one rock musical that’s not to be missed.