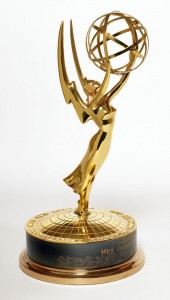 Awards were handed out last night in a slow and lackluster presentation that we found both boring and mostly predictable. The reviews for the program have been mostly luke-warm. The New York Post called it

one of the “least entertaining shows about entertainment in Emmy history.”

Among the lowlights, Charlie Sheen showed up to prove to the world that he is now clean and sober.

Where was Ricky Gervais when you needed him?

In case anyone cares, here is a full list of last night’s winners.