A strong, solid and understated performance by Joseph Gordon-Levitt and a hilariously funny turn from Seth Rogen as his best friend makes 50/50, the new film from director Jonathan Levine a motion picture well worth seeing.

Based on the true story of screenwriter, Will Reiser who is in real life Seth Rogan’s best friend, the story looks at the lead character, 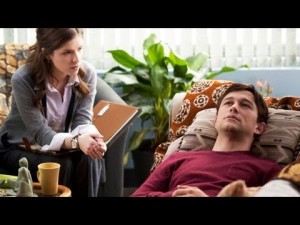 Adam’s journey after being diagnosed with a rare form of cancer.

While the filmmakers could have easily taken the “Terms of Endearment” route, they wisely didn’t pander to cheap emotional punch lines. 50/50 is an honest exploration of friendships and relationships and a clear observation of how suddenly life changes after a life threatening diagnosis.

If the subject matter wasn’t cancer, 50/50 would still make for a fun buddy picture, but it is the seriousness of the subject that makes the film more compelling and ultimately life affirming.

Rogen repeats his true life reactions and interaction with his buddy, Reiser after he got sick in 2005. Rogen is basically playing himself, and he is one funny, f-bomb dropping, manscaping dude.

Angelica Houston is excellent as the mom who is already burdened by having to care for a husband with Alzheimer’s when she learns of her son’s disease. Anna Kendrick is totally believable as a young psychologist who while helping Levitt’s character, begins to fall for him. Bryce Dallas Howard rounds out the cast as the emotionally lacking shallow girlfriend.

Shot in Vancouver, Canada, the film sometimes looks as bleak as Reiser’s life must have become. There are no clever crane or dolly shots here. No CGI. It’s comedic storytelling about a serious subject.

Despite it’s candid sense of humor, 50/50 still packs a punch. It’s poignant ending manages to evoke a tear or two before quickly yanking at your funny bone, reminding you that life is so often bitter sweet.