THE FEST FOR BEATLES FANS (www.thefest.com) hits Los Angeles Friday-Sunday October 10-12, when more than 5,000 Beatles fans from over 20 states, Canada, and other countries around the globe come together with West Coast Beatles fans to celebrate 50 years of the Fab Four’s legendary music and iconic influence.

Major special guests recall their memories shared with the Fab Four, and musical guests sing their own hits and favorite Beatles songs. LIVERPOOL, the world’s finest Beatles tribute band, performs in concert each night. Friday night, the dance floor opens up to kick off this incredible weekend with the Sixties Dance Party, where prizes for winners in both the general 60s and look-alike categories will be awarded. Saturday and Sunday nights, the three + hour rock concert will feature LIVERPOOL and all the musical guests, culminating in a thrilling All-Star jam. 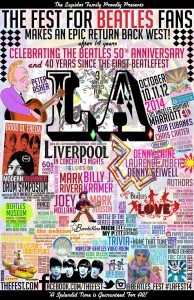 and authors will speak, show presentations, and participate in lively and enlightening discussions about The Beatles. CHRIS CARTER, whose British Invasion show on SiriusXM is heard every Sunday on Little Steven’s Underground Garage, SiriusXM channel 21, will emcee. Chris will also be hosting his Breakfast With The Beatles show live from The Fest on Sunday morning, October 12!

Other speakers include, JACK OLIVER, former President of Apple Records, who will discuss the transformative years 1969-1971. ANGIE MCCARTNEY is showing up to talk about her new book as will former Beatles secretary, FREDA KELLY, who will be on hand to introduce her celebrated and not to be missed film, ‘GOOD OL’ FREDA.’

The festival opens today and runs through October 12th.

Check it out at:

TICKETS AVAILABLE AT THE DOOR DURING THE RUN OF THE FESTIVAL.