As decency and dignity continues to get shredded in our current political climate Farragut North by Beau Willimon, creator of Netflix’s “House of Cards,” gives us a revealing look behind the curtain and lets us observe the puppet masters who mold the image of our political candidates and elected officials. It’s easy to think Jarred Kushner or Steve Bannon while watching this new guest production at the Odyssey Theatre in West Los Angeles, 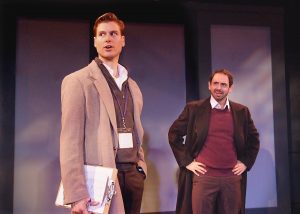 Stephen Bellamy (Jack Tynan ) is a likable though morally deficient young go getter who is press secretary for a Democratic candidate with an eye on the White House. Though only 25, Stephen’s road to success is almost a certainty. He is handsome, cocky and willing to sacrifice in order to succeed.

His boss, campaign manager Paul Zara (Geoffrey Lower) grooms Stephen to follow in his footsteps. The younger man learns fast, but when he receives a job offer from the competition, he takes a misstep which sucks him into a world of confusion and betrayal that might quickly kills his dreams and could possibly end his career. One white lie, one omission is all it takes to set the sordid wheels 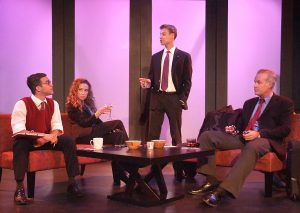 A taut, plot twisting study in trust and loyalty, Farrugut North is full of emotional and sexual intrigue as we witness these charismatic people get caught up in a world of unbridled ambition and back-door politics.

The rest of the cast, Jennifer Cannon, Adam Faison, Margaret Fegan and Francisco J. Rodriguez, are all solid in their roles – but kudos especially go out to Geoffrey Lower as Paul Zara and Andy Umberger as Tom Duffy, the campaign manager for the opposing 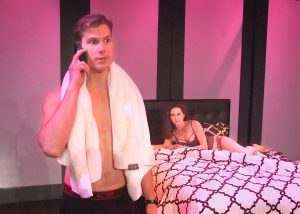 Farrugut North is compelling theater that is perhaps more relevant in today’s world than when it was first created. This slick production does the story proud.

Parking available onsite for a fee or free street parking.