The Santa Monica mist didn’t cloud the issue at the recent Digital Hollywood Summit held at the classy Ritz Carlton hotel at Marina Del Rey. What effect this multi headed tech-Hydra will have on the entertainment capital of the world was the issue under discussion at this four-day event. 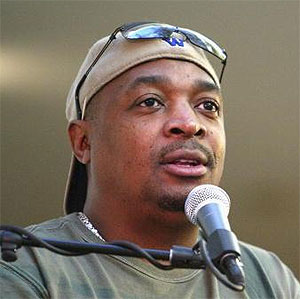 the impact new technology is having on the urban music scene. Chuck D, Hyambo Joshua, Mike Caren, Evidence, and others joined Leo Rodgers on the Industry Leaders panel. Chuck D was more than eager to tell the attendees that he has no idea what is going to happen in the digital-technology revolution, ‘cept he knows things are gonna change. “How you gonna process all that stuff out there? When you know how to do that you gonna be happening!” Chuck D oozed confidence that he was going to “eventually” work it out, and not let the changing landscape of the music industry toss him up on some barren island.

Others on the panel cited changes that are hurting the industry, like the number of independent artists not signing to majors, choosing instead to go it alone and build their own audience and fan base using YouTube, Twitter, FaceBook and other forms of social networking.

Michael Perretta, AKA Evidence, lamented the disappearance of the large wads of money that were floating around in the nineties and 00’s. “There’s a lot of weak artists out there,” Chuck D explained, but he didn’t rule out the cream rising to the top even in this more democratized music landscape. Michael Clervoix III, AKA, Sha Money put it a little more clearly, “This is the industry with no education requirements, and you got a lot of idiots. They’re chasing money, not knowledge.” Chuck D and Rodgers nodded in agreement. “Yep,” chimed in Chuck D. “You can go to your smart-ass phone! There ain’t nothing like a dum-ass with a smart-ass phone!”

The digital world of entertainment is perplexing, but as Chuck D concluded, “…so you gonna build a business, or look for a job?” The panel agreed that though it is unclear how this new technology and opportunity is going to interface with the music world it is not going to stop business from happening and someone getting rich.