Launching their 2015 season after a successful, award winning year in 2014, the Skylight Theatre Company has opened with a thought-provoking drama by Allen Barton called DISCONNECTION.  Based in part on the playwright’s own personal experiences with Scientology, the play is a powerful indictment of contemporary religious intrusion into personal lives and is a production that should not be missed.

As the story unfolds,

“Landon” (Jay Huguley)  is a successful lawyer who is depressed after the death of his wife four years earlier, a death he is responsible for.  He visits “Michel” (Dennis Nollette), an elderly piano teacher, thinking that by sharpening his music skills he may be able to find some peace of mind.  Both men are members of a powerful Church that pays no taxes and uses fear, threats of violence and an implied moral authority to restrict freedom of speech, and even more damagingly, forces it’s members to disassociate with friends and family who are deemed to be “suppressive.”

Landon’s daughter, “Tess” (Carter Scott) also a church member, has not been allowed to see or speak to her father since the deadly accident.  Tess has become a high ranking staff member who reports directly to the Church’s young and volatile “Chairman,” (Everette Wallin).  When Tess and her husband, “Nick,” (Luke Cook) another high up staff member in the organization discover that Tess is pregnant, she informs Nick that she is leaving the Church.  Children it seems are a distraction and are not allowed amongst the staff.

Tess’ husband soon reveals himself to be more loyal to the Chairman than he is to his pregnant wife.  He tries to convince Tess to have an abortion but she refused and before long faces the wrath of the Chairman as he rants and threatens to end her marriage to Nick and destroy Tess in the process. 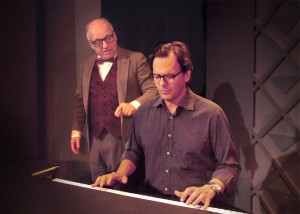 founder of this dogmatic religion that uses a mix of science fiction, among other things, as it’s basis in fact.  Now in hiding and reflecting back on his life, Oldman is particularly unhappy about the fact that his Church is now in the hands of a mere ‘boy’ as Oldman refers to the Chairman.  His original intentions, he tells us, were well meaning, but his vision took a wrong turn and Oldman now feels guilt and some regret over the wrongs he has committed along the way.

Director, Joel Polis ably guides his highly talented cast.  Carter Scott, making her first professional theater appearance is exceptional as “Tess.”   It is hard not to identify with her plight. Luke Cook is perfect as her  weasly, brainwashed, robotic husband, “Nick,” who uses his real Australian accent in this production.  Whether intended or not, it subtly indicates the international reach of the Church of which “Nick” is a devoted member.

Robert L. Hughes finds a nice balance between dictator and prophet with his monologue as “Oldman” and Everette 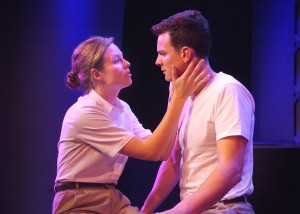 Wallin as “Chairman” is frightening in the role of the violent, crazy as a fox ‘boy’ now in firm control of the movement.

Jay Huguley as “Landon” and Dennis Nollette as “Michel” are also impressive in their respective roles.

Jeff McLaughlin’s set and lighting design and Peter Bayne’s sound design were effective in bringing the production to life.

It should also be mentioned that all the piano playing in the piece were performed (and pre-recorded) by playwright, Allen Barton.

Barton needs to be commended for so ably telling this disturbing and pertinent story.  In this current age where dogma has taken a hold of many impressionable minds, it is important to get a glimpse at the inner workings of organizations such as the Church in order to learn about their their fear based modus operandi, not to mention the life-long damage they inflict on individuals who dare to defy them.

As a final statement to the audience, Carter Scott’s “Tess” reminds us not to be smug and believe that only stupid people fall prey to ill conceived groups and religions.  In a moment of weakness, she tell us, we are all susceptible.