Had the pleasure to see a very cool, low key indie thriller last night called “Two Step” written and directed by first time feature director, Alex R. Johnson.  The story deals with James, (Skyy Moore) a young college drop out who has a couple of very bad days after he becomes a victim of a home invasion robbery.

As the film opens, James 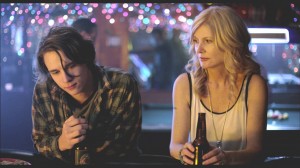 arrives at his grandmother’s house, his only living relative, to find her dying of a  stroke. Before long he learns that Granny has left him eighty five thousand dollars and her house. James is suddenly flush with cash.

He makes friends with a kindly neighbor, a former ballet dancer called Dot (Beth Broderick) who becomes something of a mother figure and his only friend in  town.

Meanwhile a psychotic low life criminal called Webb ( James Landry Hebert) has just gotten out of jail and is very quickly back to his old ways.  Webb is working a scam where he calls elderly people and pretends to be their troubled grandson who needs a loan. Most of the time the scam backfires, but once in a while it doesn’t.

Webb discovers that he has been dumped by his girlfriend, Amy (Ashley Rae Spillers) a girl who he had beaten up.  Amy  is now 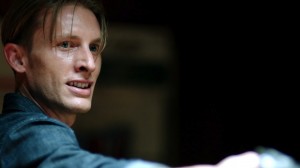 shacked up with Webb’s former employer Duane (Jason Douglas) and Webb is pissed. He owes Duane a large amount of cash and is quickly given an ultimatum. Pay up and get out of town or have your ass kicked by one of Duane’s heavies.

As Webb continues his calls to the elderly in order to find money he and James randomly connect.

It is a tense wait for the two to meet up in person and when they do the outcome is bloody and violent. Webb soon figures out that James has an inheritance and knows he has hit the jackpot. Now how to get a hold of the cash. James only has a $900 a day ATM limit.

More suspense and violence are in store till James and Webb’s destinies  collide for the last time and the third act sees the rampage come to an end. It’s a relief when it does. Johnson makes you care for these characters, 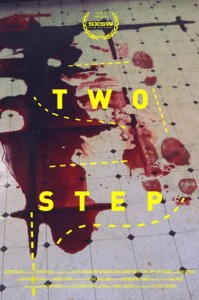 “Two Step” is a finely crafted character driven thrill ride that keeps the tension on a low boil. That’s not to say the film doesn’t also have it’s “boo” moments that will have you jumping out of your seat.

The entire cast, all Texas locals, are excellent here, right down the the under fives. The film perfectly captures the tonality of suburban Austin, Texas where it was shot.

“Two Step” is also an inspiration to aspiring filmmakers. Made on a low budget it has garnered great reviews from Variety, The Hollywood Reporter and The New York Times.  It’s success shows that determination and a “no is not an option” attitude will get things done.  It’s a film made for art’s sake and writer/director Alex Johnson’s win here is also a win for indie crime and thriller fans everywhere.

“Two Step” opens Friday, August 7th at the Arena Theater in Los Angeles with VOD to follow in September.  With beautifully stylized cinematography by Andy Lilien this is well worth seeing on the big screen.