Heartbreaking, but ultimately positive and powerful, the World Premiere of SHADES OF DISCLOSURE, reminds us of the effects of the HIV/AIDS epidemic that still continues to pose a host of social injustices such as homophobia, racism, immigration rights, healthcare discrimination, and the rights of transpersons.

by the revolutionary QueerWise, a Los Angeles based group of LGBTQ writers and spoken word artists, Shades of Disclosure introduces us to a a number of HIV/AIDS survivors, and a few that were spared. Their deep and personal stories illuminate not only what they went through when the plague hit some thirty years earlier but how it still impacts their lives today.

The cast members on stage are not actors playing roles. They are real people sharing remembrances of heartbreak and loss, of good luck and bad. Some on stage were infected early while others, though promiscuous and care-free, escaped the epidemic.

Wrapped in an atmosphere 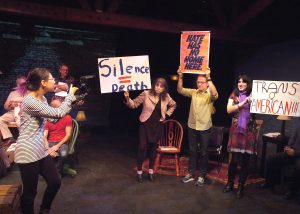 of the current political climate, QueerWise tell their stories in well staged production that encourages others to do the same. “Who Are You?” they ask.

The outpouring of truthfulness on stage soon becomes contagious and one cannot help but feel a deep empathy.

Ultimately, we know that honesty about ones self is a beautiful, unifying and galvanizing force that we need to carry into 2017 if we are to survive, thrive, and maintain, says director, Michael Kearns.

Though it may sound like this performance piece is a downer, it is actually a celebration of being alive. 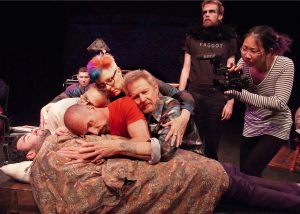 Something we can all relate to.