HEDWIG AND THE ANGRY INCH is an innovative, powerful and wickedly humorous musical that will stay with you long after the final curtain.

The show actually began its life as a racy, sexually charged cabaret act. Created by STEPHEN TRASK and JOHN CAMERON MITCHELL, it first morphed into a 1998 off-Broadway hit and then 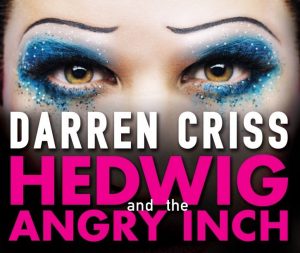 Though it’s been twenty years since it’s inception, this welcome First National Tour still packs a punch and manages to keep it fresh for new audiences. As we are drawn into Hedwig’s heart-breaking story,  the nature of the play allows for saucy, cutting-edge, ad libbed banter from it’s star, here brilliantly played by the energetic and talented, DARREN CRISS.

Hedwig, we learn, is an East German rock singer who suffered a botched sex-change operation that left her down there with only an inch of flesh. In Los Angeles to perform a one-night-only concert at the Pantages, she reveals that 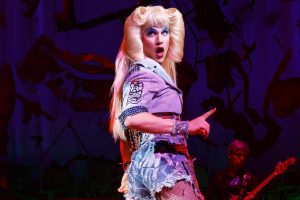 she was recently involved with “Tommy Gnosis,” a now famous rock star with whom she co-wrote many of the songs that helped fuel his career. Hedwig was in fact the “mysterious blond” who distracted Tommy while he was driving his car, causing him to crash into a school bus. That accident and it’s subsequent notoriety made Tommy a star, leaving Hedwig to live her sad life as an “internationally ignored song stylist.”

By coincidence Tommy is also in town, headlining the Hollywood Bowl, and when Hedwig opens the backstage door, she can hear him talking to his adoring fans, never once acknowledging Hedwig’s contributions.

Throughout the show we also meet the aforementioned “Yitzhak,” a doting waif of a man whom Hedwig treats with disdain. Though Yitzhak also craves the spotlight, Hedwig does all she can to prevent her husband from showing off his talents.

Joining the pair on stage 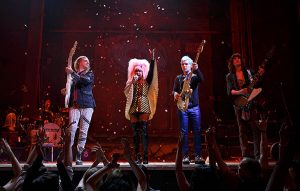 In between banter, Hedwig and the Angry Inch roll through an array of great songs, many of them a nod to glam rock, grunge and metal rock. There are also ballads like, “Wicked Little Town” and “Wig In A Box” that are also standouts.

But the real stand out here is Darren Criss. His performance as Hedwig electrifies as it breaks your heart. Criss is charming and likeable, seemingly inhabited by Hedwig’s persona in this 90 minute physically demanding role. 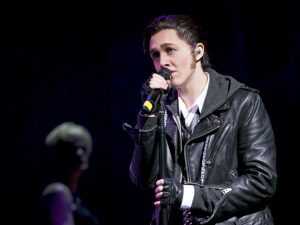 He speaks to all those with a dream not fully realized, making L.A. a perfect venue for this story. Criss’ job is not made any easier by the array of over-sized wigs and platform heels his character prances around in, but the physically fit actor makes it seem flawless.

Lena Halls surprises as “Yitzhak” once her powerful singing abilities are finally revealed, and in a clever twist, Hall becomes Hedwig by the end of the show, allowing Criss to reveal his muscular body and the fact that he is not a “slip of a girly boy” at all.

The set by JULIAN CROUCH is compact. A car crash scene with moving parts that seems a good fit for this car crash of a story.

MICHAEL MAYER’S direction keeps the show moving at a pace while some ingenious screen projections from BENJAMIN PEARCY during the beautiful ballad, “The Origin of Love,” make us feel as if we are watching Hedwig in an animated fish bowl, his thoughts coming to life in front of our eyes. 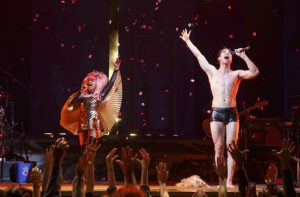 Tickets for HEDWIG AND THE ANGRY INCH are on sale now and are available for purchase at www.HollywoodPantages.com or www.Ticketmaster.com, by phone at 800-982-2787, and at the Hollywood Pantages Box Office (6233 Hollywood Boulevard). Groups of 10 or more may purchase tickets by visiting www.PantagesGroups.com or by calling 866-755-3075.