What happened to Las Vegas? When I first went there in the 80s it didn’t feel like a city of glass and steel high-rises, a corporate Disneyland. Hotel prices were low, meals were practically free and the atmosphere authentic. There was a vibe of, dare I say it, danger in the air when you sat down at a blackjack table and the stern pit boss studied you with a cold, calculated stare. Mobsters by then were probably mostly imagined, but who knows. Maybe not. Back then, Vegas shows were lavish with topless girls waving feathers. Hundreds of them it seemed. Vegas was pure Vegas. It was fun and a pleasure to experience. 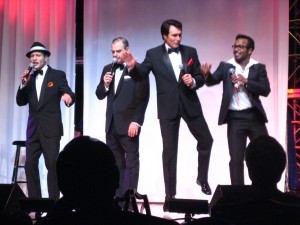 good old days, one can only imagine what it must’ve been like in the 60s when the Rat Pack, Frank Sinatra, Peter Lawford, Joey Bishop, Dean Martin and Sammy Davis Jr. reigned at the old Sands Hotel and sophisticates flocked to see them. Most of them would say it was a once in a lifetime experience.

Those golden years may be a thing of the past but there is good news. “The Rat Pack” is back, and they are currently at the newly named LVH Hotel, (formerly the Las Vegas Hilton).

Produced by Sandy Hackett, son of the late comedian Buddy Hackett, The Rat Pack Show is a fun, nostalgic, musical trip down memory lane filled with comedy, great musical standards and an on-stage camaraderie between the performers that, from the film clips I’ve seen, perfectly mimics the rapport Sinatra had with his old pals.

The show starts with a group performance of “Mack the Knife” followed by some Catskill style comedy courtesy of Hackett portraying Joey Bishop. He is cool, loose, with a confident swagger that almost gives away the fact that he is also the producer of the show.

Tom Wallek as Dean Martin takes the stage and continues to warm the crowd with the old sing-along favorite, “That’s Amore.” He is soon joined by Nicholas Brooks as Sammy Davis Jr. who nails the Sammy vibe with “What Kind of Fool am I,” augmenting it with some cool Sammy dance moves throughout the show.

Dean joins Sammy as they carry on with more music and whacky stage banter. At one point Sammy asks Dean, you like this suit? Sure, Dean replies. Me too, says Sammy. I was buried in it.

The comedy, infact the whole show works because while they are recreating a legendary lounge act of the past, the performers readily acknowledge the present, letting the audience in on the fact that they are not the real guys. Real or not, we buy it; we believe it because we want to. We accept the illusion because these performers are so damn good.

An addition to the program is the excellent Lisa Dawn Miller who appears as Sinatra’s “one love” (implying actress Eva Gardner).  Miller, also a producer of the show, performs “Wasn’t I a Good Time,” a song written by her father the late Motown hit songwriter, Ron Miller who penned classics such as “Yester-me, Yester-you, Yesterday,” “A Place in the Sun” and “Touch me in the Morning.”

Saving the Chairman of the Board’s solo spot for last, David DeCosta as ole blue eyes returns, drink and cigarette in hand as he belts out some Sinatra standards. “A Foggy Day in London Town,” “My Way” and the Ron Miller written Stevie Wonder smash, “For Once in my Life.” DeCosta is once again joined by the rest of the cast as they close with “New York, New York” by this point bringing the audience to their feet.

DeCosta is perfect as Sinatra. He has the nuances down pat and his vocals shine. Nicholas Brooks is almost as charming and sweet as the real Sammy. Wallek as Dean Martin is casual and relaxed with a strong singing voice. A stellar Dean Martin. Master of ceremonies, Hackett as Joey Bishop rounds out this talented quartet.

After the show the performers are happy to pose for picture, sign autographs and sell a few knick-knacks.

“Sandy Hackett’s Rat Pack Show” is about to hit the road. Catch them in Vegas or where ever they appear. Take your significant other, your parents or your kids. The Rat Pack is a fun, timeless, nostalgic evening with superb, uncanny performances and a great synergy on stage that makes the price of admission well worth while.