This time Linke shares a remarkable journey that saw him love deeply and then grieve desperately before finding a new love again, 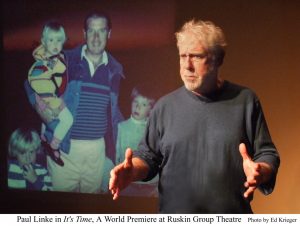 a love that has sustained him and his family for over twenty five years.

Best recognized for his role as “Artie Grossman” on the NBC-TV series CHiPs as well as for his co-starring roles in “Parenthood” and “K-PAX,” Linke’s story starts out in the 1960s. He introduces us to his younger self, a horny pot smoking college kid who has no clue where his journey is headed. Nor does he care. His main focus are girls and seeing the Doors at the Whisky Au Go Go. By chance he finds himself in a college acting workshop where at his audition he proceeds to embarrass himself with an impromptu improvised sex act on a plant. Not a great start, but, hey, it’s the 60s.  Fortunately, the people running the workshop see something in this free spirited wild child–a potential of talent–which gets him into class and ultimately sparks his interest in pursuing a life as an actor.

Having finally discovered his calling, Linke also manages to fall in love. It’s a deep, committed 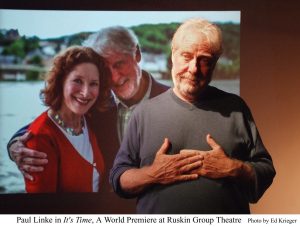 love that brings him much happiness and produces three beautiful children. But as most of us know, life sometimes has other plans. Linke’s wife is diagnosed with breast cancer and before long he finds himself a single dad with not a clue as to how to move forward.

Linke shares his deep debilitating grief while humorously revealing his attempts at dating and parenting. It’s a time of  pain and desperation but somehow Linke carries on.

Eventually, through an unexpected introduction, he meets a beautiful actress called Christine and he is instantly smitten. His nerves however get the better of him and he makes an obnoxious first impression. The opportunity almost implodes but the actress gives him another chance and gradually a deep, caring relationship is formed and a broken family slowly becomes whole again. 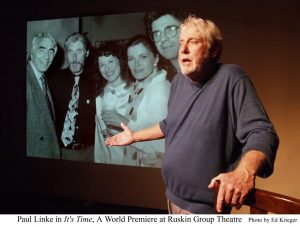 EDWARD EDWARDS, Linke’s story is brought to life through a series of projected photographs that ably connects the audience to Linke’s loved ones.

This is a beautiful journey. One that is honestly and openly shared. It is hard not to shed a tear, nor to feel empathy during Linke’s 70 minute performance. He celebrates the magnitude of life, the power of love and applauds the contributions of those around him who helped turn his life around. And isn’t that something we can all relate to? Seeing “It’s Time,” may compel you say thank you, or I love you to those who matter the most in your life.

How Much: Tickets are $25 ($20 for students, seniors, and guild members) and can be purchased in advance by calling (310) 397-3244 or online at www.ruskingrouptheatre.com Ample free parking available.