Written over two years ago, it is uncanny when one of the characters in BR’ER COTTON, the new play making it’s Los Angeles premiere at the Zephyr Theatre in Hollywood, talks about police brutality in Charlottesville, Virginia. It’s as if playwright, Tearrance Arvelle Chisholm and the Lower Depth Theatre Ensemble had a crystal ball and were able to see what was to come. But then Charlottesville is just one of many hot spots where racial tensions come to a boiling point.

Directed by Gregg T. Daniel, Br’er Cotton examines one African American family’s frustration as they try to cope with the rising tide of hatred that has enveloped 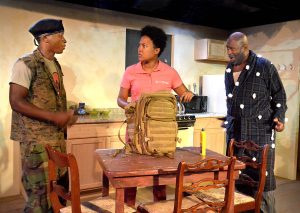 the country. Set in a run down neighborhood in Lynchburg, Virginia, an area that was once the site of a thriving cotton mill, the story focuses on 14-year-old Ruffrino (Omete Anassi) who lives with his mother and grandfather in an old deteriorated house that seems to be sinking, much like their situation.

Mom, Nadine (Yvonne Huff Lee), cleans houses to support her family, and has done so for most of her life. Her other full time occupation is worrying about her young son. Ruffrino’s granddad, Matthew, (Christopher Carrington), tells the boy that they are a “stay out of it family.” They don’t get involved in conflict. It’s pretty clear that Matthew has given up the fight.

Ruffrino, meanwhile, is well aware of the ever increasing number of police killings of young black men and he is in constant conflict with his mother and grandfather because of their complacency. Though only 14, he views himself as a revolutionary. He incites riots at school and his on-line presence, as part of a violent video game group, 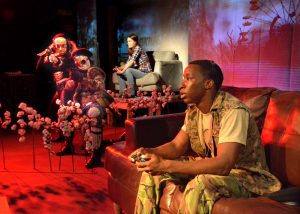 brings out the haters who frequently call him the “N” word. It is only another gamer, a young girl who’s handle is Caged_Bird99 (Emmaline Jacott) who supports and encourages him.  Imagining Caged_Bird99 to be African American, Ruffrino is in for a surprise when he discovers her true profile.

His mom, Nadine, also gets a surprise when she discovers that the house she cleans is owned by a white cop. In an unexpected twist, the Officer, (Shawn Law) relates to the hardships Nadine has to endure and she welcomes his concern. Nadine clearly has no other shoulder to lean on.

Br’er Cotton is wrapped in a cloud of tension that never lets up. Mr. Chisholm is an accomplished writer and Omete Anassi, as Ruffrino, manages to infuse the play with a youthful energy that fuels the explosive debates, and the not-so-unexpected conclusion. The rest of the top-notch cast, particularly Yvonne Huff Lee, Christopher Carrington and Shawn Law, all deliver strong and committed performances. 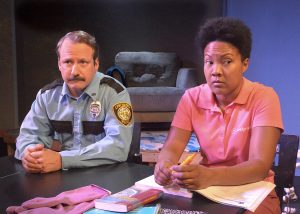 Br’er Cotton, at it’s core, is a human story filled with humility and love. It delivers a heart-wrenching, intimate glance into one black family’s struggle to navigate racial tragedy in these troubled times. Don’t miss it!

When: Br’er Cotton runs Saturdays and Mondays at 8pm, Sundays at 3pm through October 29, 2017 (no performance on Monday Oct 9th).